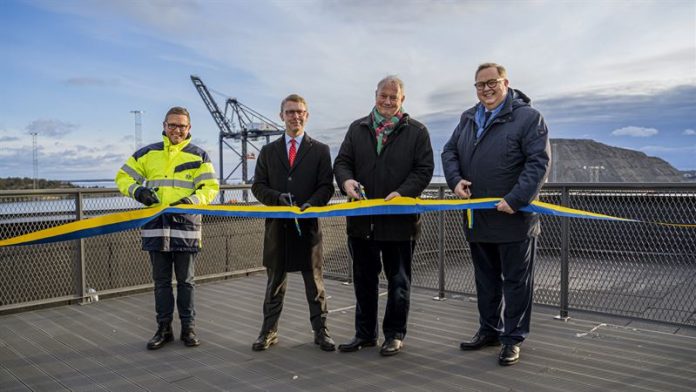 The 1st February 2022 saw the first ferry on Stena Line’s new route Nynäshamn-Hanko set sail towards Finland. The vessel Urd left Nynäshamn/Stockholm Norvik Port after an inauguration ceremony with a small group of guests from business and politics. Starting with three departures per week, the link Nynäshamn-Hanko will soon switch to a daily schedule, when the ferry Stena Gothica joins its sister vessel in the beginning of May.

”By Urd’s departure to Finland, we close a gap in the transport network. This new service is primarily an outcome of customer dialogue and market demand. But to bring it to life you also need to be somewhat entrepreneurial, and it requires hard work, a dedicated team and strong commitment to make a new route a success. So far the response has been very positive which shows that we made the right decision”, says Johan Edelman, Trade Director Baltic Sea North Stena Line.

The new route marks the next step in Stena Line’s ambition to further expand and strengthen its position in the Baltic Sea. The new service will accommodate the increasing demand of the freight customers for seamless transports in the Baltic Sea and beyond. By extending the network to Finland, Stena Line further improves and expands the most comprehensive, efficient, and integrated ferry network in Northern Europe.

“It is a straight forward, transport focussed setup, dedicated to establish a floating bridge between Central Sweden and Southern Finland. Reliable ships and flexible, solution-seeking staff are the pillars of Nynäshamn-Hanko. We will carry with us the memory of the inauguration when we are back at our desks to work on further developing the link and fulfilling our aims for growth”, says Johan Edelman.

The first ship on February 1 towards Finnish Hanko sails overnight for a crossing time of 12 hours. Nynäshamn-Hanko is the first ever route from Stena Line connecting Sweden with mainland Finland. A proud moment for all involved:

“The commitment of Stena Line in introducing another route from Stockholm Norvik Port emphasises how important the newly built port is for the sustainable supply of goods to Sweden’s largest consumer area. The port has strong intermodal connections to the rest of Sweden both by road and by rail and the location is closer to the fairway than any other ports on the Swedish east coast. It is a success that we together can grow with yet another new route, this time between Sweden and Finland,” says Fredrik Lindstål, Chair of the Board at Ports of Stockholm.

The vessels Urd and Stena Gothica offer a capacity of 1,600 lanemeters and give space to 186 passengers each. The dedicated cargo focus caters for all needs of Stena Line´s freight customers, be it traditional accompanied and unaccompanied units, containers, special cargo or intermodal units arriving by rail.