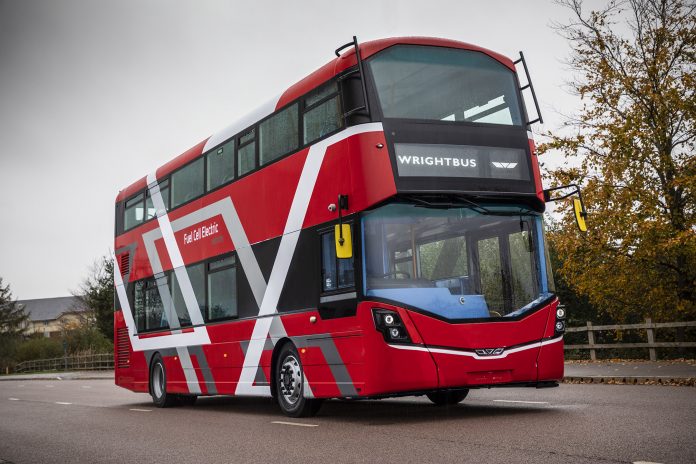 Visitors to the Wrightbus stand at this year’s Euro Bus Expo 2018 (EBE) witnessed the ground-breaking StreetDeck Fuel Cell Electric Vehicle (FCEV) – the first double deck in the world to use fuel cell technology to deliver zero emissions in operation.

Earlier this year it was announced that Wrightbus has been selected as the sole supplier of double deck buses in the UK for the Joint Initiative for Hydrogen Vehicles in Europe (JIVE) following a competitive tender process. The company has also been confirmed as one of two providing single deck buses for the scheme.

The vehicle on display at the EBE show in Birmingham has been used to demonstrate the technology and has recently completed a route shadowing trial in Aberdeen. Built to meet TfL specification, the vehicle operates on a Ballard FCveloCity fuel cell, a Siemens drivetrain and a 48 kW traction battery pack. It has a passenger capacity of 64 seated and 21 standing, with an overall length of 10.9 metres and width of 2.55 metres.

Fuel cell technology works by mixing hydrogen and compressed air (oxygen) in a chemical process to generate electric power to drive the bus. The power generated is emissions free, save for harmless water vapour and waste heat which can be used for on boarding heating system.

Hydrogen, which is one of the most abundant elements in the universe, provides safe and reliable power and can be generated from renewable energy sources (such as solar, wind or wave), minimising the ‘well to wheel’ impact of the new StreetDeck FCEV.

Zero emissions are delivered alongside a 200-mile operating range, with an extended storage option which increases the range to 265 miles. The bus typically re-fuels at the end of the working day, and refuelling takes around just 7 minutes.

The fuel cell vehicle features an electric drive axle packaged to allow a full flat floor throughout the bus, a zero-emission heating/cooling system and remote diagnostics. Key to the success of this concept are the lightweight hydrogen storage tanks, and the automatic battery management system which continuously monitors and balances the stored power while the vehicle is in service.

The modular platform concept developed by Wrightbus means that the new StreetDeck FCEV shares the same chassis as the full Electric (EV) models in the range, with the rear module containing overnight charging, opportunity charging or fuel cell components as appropriate. The chassis also provides the same platform for single or double deck models.

The JIVE initiative has been created to promote the development of fuel cell technology in buses throughout Europe. In the UK, the project involves three ‘cluster’ cities which are; Aberdeen, Birmingham and London with the operation of up to 50 fuel cell powered vehicles. Plans to expand the JIVE initiative are expected to be announced in the near future.

Among its activities, JIVE aims to assist the commercialisation of fuel cell buses by deploying 139 vehicles across nine locations in Europe and will effectively double the quantity of fuel cell buses operating across the continent. The initiative uses coordinated procurement to unlock the economies of scale required to reduce the cost of the vehicles.

Sir William Wright CBE, Co-Founder & Director of Wrights Group who has spearheaded the development of zero emission bus technologies, said: “Our mission at Wrightbus has always been to lead the way in terms of innovation, including the development of clean bus technology to improve the environment, particularly in towns and cities. Working closely with key partners such as Ballard and Siemens, we have delivered another first and, in the process, given operators and the various authorities even more choice when it comes to choosing the low-carbon approach most suitable to their cities’ needs.”

The Next Bus is Coming!

When the new Government is formed, it must support the Bus & Coach Industry – CTTC

Webinar: How to restart bus operations after a lockdown?

Truck technology is evolving on many fronts

ABOUT US
Established in 2003, JJDS Publications t/a Fleet Publications is the largest publisher of Transport orientated magazines in Ireland. Among its monthly and quarterly titles include Fleet Transport, Fleet Car, Fleet Van & Utility, Fleet Bus & Coach, Fleet Trailer & Body Builder, Fleet Maritime and Green Fleet Management. The company is based in Claremorris, County Mayo and has 15 full and part-time employees. Through these titles positions on various European Jury panels are held such as International Truck of the Year, International Van of the Year, International Bus/ Coach of the Year, Truck Innovation of the Year, European Transport Company of the Year. Its websites are www.fleet.ie and www.fleetcar.ie.
FOLLOW US
© copyrights Fleet publications  Privacy Policy
Tel: +353 94 9372819
Email: enquiries@fleet.ie
28shares
MORE STORIES