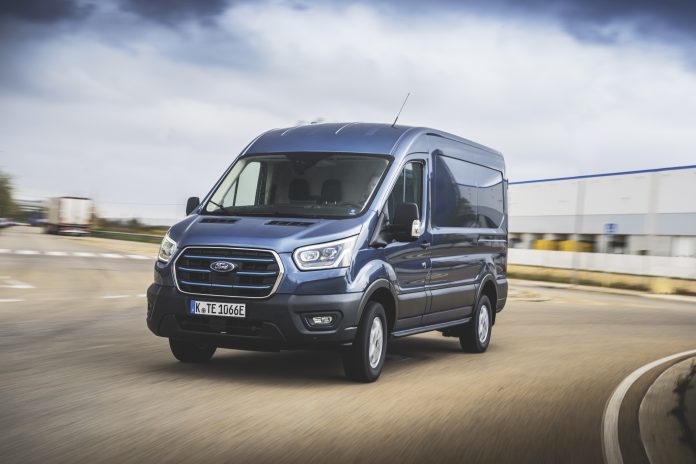 There’s no escaping the reality that electric vehicles are no longer something we will have to adapt to in the future; they’re very much part of the here and now. That applies as much to the van sector as passenger cars. The challenge to date though for van manufacturers has been to come up with a product that offers comparable payload and volume capabilities as diesel models, but can also offer a decent range between charges, with many of the larger van offerings in particular being rather challenged on the range front.

Ford’s first all-electric van offering, the E-Transit aims to change that, as it’s capable of traveling a distance of between 238km and 317km on the WLTP cycle from its 68 kWh battery (depending on electric motor and van specification). Granted, that’s in perfect conditions, but Ford says that in real world environments with full payloads and normal driving, you should expect to get at least 180km, which is better than its competition can manage, by a long distance in some cases. There’s plenty of oomph too, with electric motors offering outputs of 198 kW/269 PS or 135 kW/184 PS, and a healthy torque figure of 430 Nm.

The ability to fast DC charge at up to 115 kW means the E-Transit can be charged to 80% from 15% in 34 minutes, while overnight charging on a standard single phase wallbox should take around 11.5 hours.

Sitting into the E-Transit you’ll notice the latest Sync 4 infotainment system, a dial instead of a gearstick to engage drive and, on the display in front of you, a power use indicator in place of a rev counter. Otherwise it’s largely familiar Transit layout.

Driving the E-Transit (the 184PS version) with 450kg of payload on board, acceleration is brisk. Refinement is to a very high standard, while the single-speed transmission manoeuvring in urban traffic so much more relaxing than in a manual equivalent. There’s an ‘L’ mode that provides some regenerative braking, though it’s not particularly strong compared to other vehicles we have driven.

Noticeable is the independent rear suspension which replaces the live axle set-up on the diesel – it seems to do a good job in eliminating many of the bumps you expect in vans.

Offered in two roof heights and three body lengths, prices for the E-Transit 350M L2H2 model with 184 PS start from €59,264. Not cheap compared to the equivalent diesel model, but competitively priced compared to its rivals, the E-Transit looks set fair to provide a significant shake-up to the rapidly evolving electric light commercial vehicle market. Cathal Doyle reporting from Barcelona