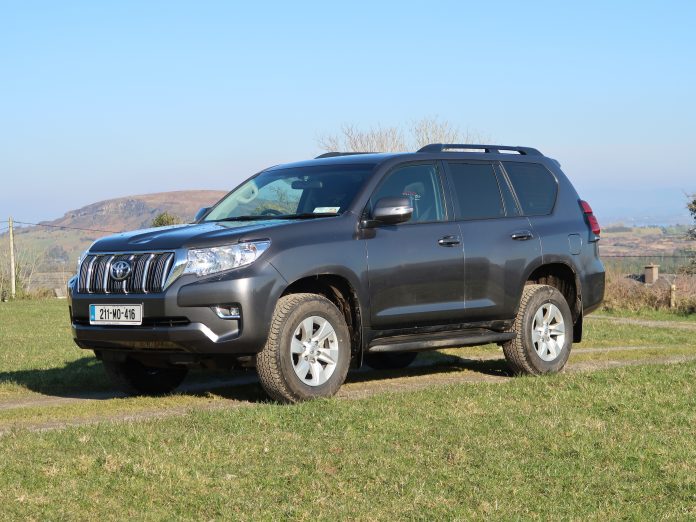 Commercial vehicle customers tend to have a pretty broad choice these days and the Commercial SUV is a segment for those who need a tough, reliable four wheel drive machine for off-road or towing work. To many the default option has long been the Toyota Land Cruiser.

While 5-seater Business versions have proved popular in recent years – at least before the Government clamped down on this sub-category to make them less value for money, the majority of Land Cruisers sold are the 2 seat Commercial versions. Available in 3-door SWB and 5-door LWB body lengths, the back seats are stripped out and replaced by a solid flat floor and a steel mesh bulkhead separating the front passenger area from the load compartment. That creates a useful easily accessible load space – though if maximum load volume is a priority, the load area doesn’t hold a candle to that offered by dedicated vans.

The Land Cruiser received a slight revision towards the end of last year, the main benefit being improved engine performance. Power from the familiar 2.8-litre diesel has increased by 20hp to 204hp, while there’s also a significant boost to torque – up 50Nm to a rather impressive 500Nm. Stop & Start technology helps provide an average fuel consumption figure of 9.4 l/100 km while CO2 emissions are 247 g/km for the LWB auto version tested. Acceleration has improved significantly too for the auto version – its time of 9.9 seconds from 0-100km/h is 3 seconds faster than before.

The other main revision was to the multimedia interface which now offers Apple CarPlay and Android Auto connectivity. Otherwise it’s largely as you were for the model that was previously face-lifted in 2017, with an interior that is functional and hardwearing enough to stand the test of time and abuse.

The manual gearbox option has traditionally been more popular for the Land Cruiser but this is changing with sales of the six-speed auto version on the increase. Certainly we found that the auto version excels at pulling a heavily loaded trailer, notably when moving away on an uphill incline without having to engage the low ratio gearbox. It’s also easier when reversing uphill – whereas in a manual version there is a tendency to ride the clutch to get the power to the wheels, the automatic version applies the power more smoothly. Overall the ability to tow heavy loads in a stable fashion without undue stress is very impressive. 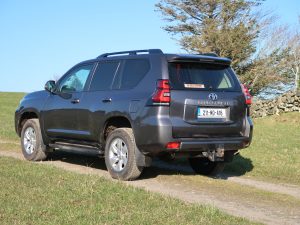 Interestingly, an experienced owner of a latest generation manual version who has previously operated a number of the earlier models noted that he finds the lower ratios of that gearbox to be too high geared when towing, having to often engage the low ratio box to move away.

The Land Cruiser’s off-road capabilities are second to none, and equipped with the likes of that low ratio gearbox, differential locks and Hill Descent Control, it’s well equipped to tackle the toughest terrain. However we’d query the Bridgestone Dueler H/T tyres fitted as original equipment by Toyota. Fine for road use, the tread pattern is far too closely woven to be any use on muddy or slippery tracks or fields. Anyone intending to take their Land Cruisers off-road would be advised to fit alternative rubber.

On-road manners are typical of such large SUVs – comfortable, but with too much body roll to encourage a press-on driving style. That said, there’s a wide range of safety equipment fitted as standard including a pre-collision system, Lane Departure Alert and Road Sign Assist.

A heavy SUV like this isn’t going to be cheap to run. A few weeks of typical use including some trailer work and a mix of longer and shorter journeys has seen an initial consumption average of 12.3 l/100km (22.9 mpg) on the vehicle tested, though that may improve as the engines wears in.

Prices for the LWB Land Cruiser Automatic are from €49,245 with the range-starting SWB Manual version priced from €46,915.

It’s not hard to see why the Land Cruiser has such a dedicated following. If you need an off-road capable vehicle that can tow up to 3-tonnes, it remains the benchmark. However if you don’t, there are alternative that are cheaper to run, can carry more in their load compartment, and offer a better on-road driving experience. Horses for courses and all that…. 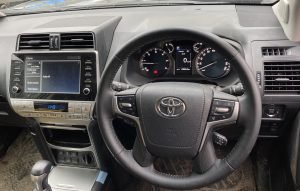