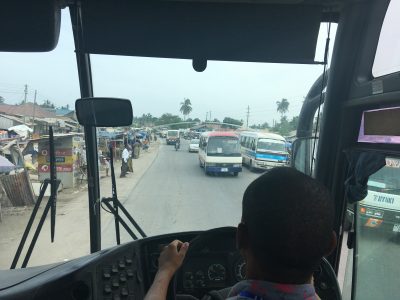 Transaid is to play a significant role in a new Foreign, Commonwealth & Development Office (FCDO*) funded research programme to investigate human trafficking along key trade corridors in East Africa, with a focus on the role that transporters play in facilitating illegal trafficking and how this harmful practice can be interrupted.

The research is being managed by IMC Worldwide and implemented by a consortium led by Cardno Emerging Markets, which includes Transaid, North Star Alliance and Scriptoria. It aims to investigate the impact of High Volume Transport (HVT) corridors on social inclusion and look at what possible solutions there are to identify and prevent human trafficking.

Currently no African country fully meets the standards set by the Trafficking Victims Protection Act established in 2000, with human trafficking most commonly targeting vulnerable groups including women and children.

Caroline Barber, Chief Executive of Transaid, says: “As a consortium we want to better understand and shed light on the severity of the issues that surround human trafficking through long-distance transport corridors and cross-border posts. This will involve looking at the role stakeholders in the transport sector play, the legislative frameworks and opportunities to develop effective interventions and drive policy change.

“We believe that through this ground-breaking research and the development of appropriate prevention strategies with in-country partners, we can bring about lasting impact for vulnerable groups in both rural and urban communities.”

The United Nations Office on Drugs and Crime states a significant proportion of trafficking victims are unaware that they are being trafficked at the time of transport, due to deception. Therefore, increasing community awareness around the signs of human trafficking and how to avoid becoming trafficked may decrease its occurrence.

Globally, women make up three-quarters of the identified victims of trafficking for sexual exploitation and 35 per cent of individuals who are trafficked for forced labour.[1] Illegal migrants are also a vulnerable group who are susceptible due in part to the fact that they are less likely to seek help from authorities, lack knowledge of where to solicit aid, may lack an understanding of the local language, and awareness of their rights.

Barber concludes: “We hope the outcomes of the initial 21-month research programme will have the potential to reach and reduce the vulnerability of the most at-risk individuals through one main gateway: transport.”

Project activities will focus on Tanzania and Uganda; two countries where the consortium has extensive experience and can draw on existing partnerships. Uganda forms part of the busy Northern Corridor linking Kigali to Mombasa, and the port of Dar es Salaam in Tanzania is the start and end of a key transport corridor linking the port with Bujumbura. Both corridors will offer different perspectives during the research phase and subsequent pilot activities.

For more information and to find out how you can support the organisation visit www.transaid.org.