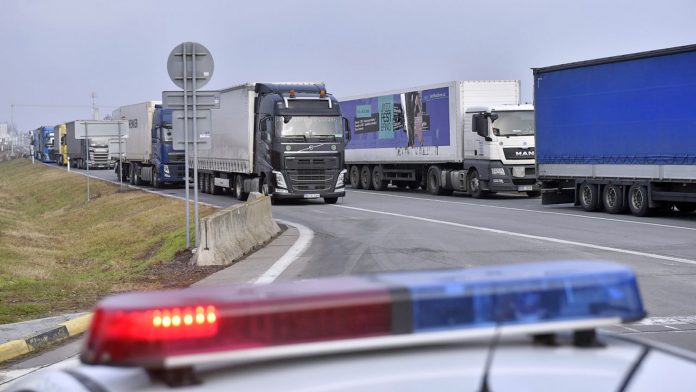 In the first half of May, international road freight transport in the Czech Republic operated according to the original crisis settings and regulations, ie with regard to continuity.

Problems at the borders, mostly of a temporal nature, were and still are caused by the necessary control of drivers and also, above all, by the increased traffic of so-called commuters.

The originally considered so-called Green Lines for international truck transport are not working. The obstacle is, on the one hand, the physical possibilities of border crossings – they often consist only of a road or motorway with two lanes, and still low numbers of open border crossings and a low number of members of the police, army and customs officers.
One to three inspection bodies are available for one queue of vehicles, depending on specific crossings. The inspection itself takes too long, and commuters and with them truck drivers wait two to three hours when crossing the border, especially to Germany and Poland.
According to the newly valid government regulation, Czechs who go to Germany for up to 72 hours due to “irregular work” also have an exception for travel. Upon presentation of the contract or invitation letter, he/she may leave and return without having to undergo a coronavirus test or a 14-day quarantine. Citizens of the European Union coming to the Czech Republic also have the same privilege, but in their case, confirmation of a negative test is a necessity. The number of people who can cross borders is increasing. Police officers record cases of Germans or Austrians who live in southern Bohemia but travel to their home countries, for example, to visit doctors. From Monday, citizens of non-EU countries, such as seasonal workers in agriculture or in health and social services, can also enter the Czech Republic with a negative coronation test.

International passenger transport
The Czech government has approved the resumption of international traffic, which has been halted since mid-March. From Monday 11 May, trains and buses can run across the border again, if the carriers decide to do so and there is interest from passengers. Further crossings are opening on the borders with Austria and Germany. For passenger transport, it is possible to use the crossings, which were intended for commuters, it is still true that they are open from 5 am to 11 pm. It is still true that a negative PCR test for coronavirus is required when returning to the Czech Republic. If a person does not present a certificate at a border check, he/she must be quarantined for 14 days or tested within 72 hours of crossing the border.

Rail transport
International rail transport will be gradually renewed in connection with the dismantling of measures in neighboring countries. For international routes, they are discussing the gradual introduction of selected trains and increasing traffic at various times from June until the summer holidays. They will specify the exact schedule in agreement with Czech Railways in the coming days. National rail transport is gradually moving to normal traffic. From 15 May 2020, there will be full operation of express trains ordered by the state on the following lines:
• R9: Prague – Havlickuv Brod – Brno
• R16 Prague – Klatovy – Železná Ruda
• R17 Prague – Tábor – České Budějovice / Třeboň – České Velenice
• R20 Prague – Děčín
Czech Railways is responding to the demand of the regions and increasing the scope of transport. From Monday, May 11, for example, traffic in the Hradec Králové Region expanded. There has been an increase in traffic since 1 May in the Pardubice and Olomouc regions.

Passenger road transport
Traveling abroad by car depends on the level of action in neighboring countries. At the border with Germany, the government has identified three new crossings – all of which will operate from 5 am to 11 pm:
• Lower Hermitage – Sebnitz
• Hřensko – Schmilka
• Easter eggs – Klingenthal
Border crossings, which were primarily used by commuters, have been open to all passengers since 11 May. However, there is still a time regime from 5 am to 11 pm. After returning from abroad, a negative test for coronavirus or quarantine is required (exceptions still apply to drivers of international freight transport, buses)

Air Transport
The only airport where passengers of a personal commercial flight can land remains Václav Havel Airport in Prague. Air transport is still in decline, but even this mode of passenger transport is slowly getting moving. KLM’s regular Prague-Amsterdam route departs daily from Prague Airport. Two regular routes remained in operation, which Prague Airport handled even during the pandemic. Specifically, this is a flight from Belavia to Minsk, which flies three times a week, and the Pra ha-Sofia from Bulgaria Air, which departs from Václav Havel Airport twice a week.
From 21 May, Eurowings’ flight from Prague to Düsseldorf will also be operational. Initially, it will fly until June 1, only twice a week (Thursday and Sunday), from the beginning of June, the company will expect regular daily departures. Czech Airlines renews flights to destinations:
• From 18 May 2020, Amsterdam Frankfurt am Main, Paris and Stockholm
• From May 24, 2020 Kiev
• From 25 May 2020 Odessa and Bucharest

Water transport
Inland waterway transport is unrestricted. State-owned enterprises of the river basin ensured the passage of ships on all waterways. Within the Vltava-Elbe waterway, it is possible to navigate through the locks, the State Navigation Administration informs on its website about the operating hours on this waterway. It is also possible to swim through the chambers on the Baťa canal and the river Moravia in the section Otrokovice-Rohatec.

Dismantling measures
The protection of the Czech borders is valid until 13 June 2020. At least until this date, people can cross the border only at the given crossings.
These days, Berlin is also dealing with border controls. On 9 May, Germany completely abolished border controls with Luxembourg. Those at the crossings with France, Austria and Switzerland will continue until June 15, but in a relaxed regime.
The Germans intend to talk about the loosening of the regime with Prague as well. The Germans do not control the Polish border, they only strengthen the border patrols. The German government is now recommending that the Länder abolish the hitherto mandatory 14-day quarantine for EU citizens who come to the Federal Republic from another EU country. Austria, meanwhile, has announced that it will fully open its borders with Germany from 15 June. From Friday onwards, the inspections will be only random. Vienna is also negotiating with the Czech Republic for an early return to normal borders.