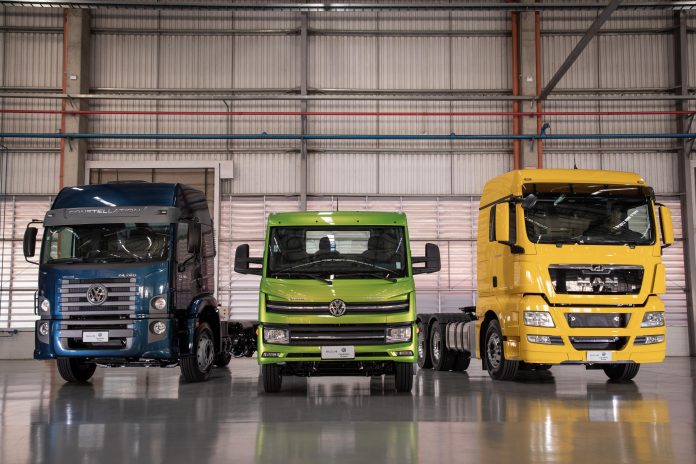 In anticipation of a downturn in the market in Europe and due to the initial effects of the global corona pandemic, the TRATON GROUP recorded falls in unit sales, sales revenue, and operating profit in the first three months of 2020 and is now making preparations for the re-opening of the economy in a very challenging environment. Unit sales of the three brands MAN, Scania, and Volkswagen Caminhões e Ônibus contracted by 20% to 46,000 (prior-year level: 57,200) vehicles in the first three months of the year. With unit sales down 21% to 42,000 (53,000) vehicles, the decline in truck sales was more marked than in buses, where a drop of 4% to around 4,000 (4,200) vehicles was recorded.

“The effects of the corona pandemic are hitting the economy as a whole hard, and that goes for the TRATON GROUP as well. What Europe needs right now are investment incentives for the environmentally friendly modernization of truck fleets as a means to overcome the crisis in this system-critical sector,” said Andreas Renschler, CEO of TRATON and member of the Board of Management at Volkswagen AG.

Between January and March, the TRATON GROUP generated sales revenue of €5.7 billion (€6.4 billion), a year-on-year contraction of 11%. At €161 million (€490 million), the operating profit fell by two thirds. The operating return on sales fell to 2.8% after a figure of 7.6% for the first three months of the previous year. Incoming orders fell by 16% to 54,200 units. The book-to-bill ratio (unit sales divided by incoming orders) was 1.18 compared with 1.13 as recorded for the first three months of 2019.

The drop in unit sales of the three brands Scania, MAN and Volkswagen Caminhões e Ônibus was most marked in Europe (EU27+3 region) with a 30% decline, while South America succeeded in posting a 4% increase in unit sales on the back of a positive showing from Brazil. The increasing spread of the coronavirus in the first three months of the year was an additional burden on unit sales, resulting in closures in our global network of production plants as of mid-March. Since the end of April, the brands of the TRATON GROUP have gradually been restarting production operations.

The TRATON GROUP has responded to the corona crisis with a raft of measures. These include securing the liquidity of the company, as well as setting up emergency plans and introducing temporary production stops. “The effects of the corona pandemic have forced us to reconsider our investment priorities and research and development projects. There is a clear focus on safeguarding liquidity here. And we are bracing ourselves for a substantial decline in both sales revenue and operating profit in the second quarter. All the key figures will be negatively impacted,” said Christian Schulz, CFO of the TRATON GROUP.

The TRATON GROUP at a glance

In the Industrial Business segment, sales revenue fell by 12% to €5.6 billion (€6.3 billion), primarily as a result of the decline in New Vehicles business after the collapse of the market. Operating profit stood at €135 million (€457 million). Measures taken to address the corona pandemic – notably the closure of production sites around the globe as of the second half of March – had a negative impact on operating profit in the period under review. The decrease was also a result of lower volumes, higher depreciation and amortization charges, and additional expenses in connection with the introduction of the new generation of trucks at MAN Truck & Bus.

The Financial Services segment generated sales revenue of €216 million (€203 million) and an operating profit of €26 million (€33 million). While portfolio growth had a positive effect on earnings, the latter was offset by lower margins and increased operating costs, mainly expenses for bad debt provisions.

Operating units at a glance

It is currently impossible to predict when a new forecast for the current fiscal year will be possible with certainty. The effect of the corona pandemic on customer demand, supply chains, and production cannot be assessed reliably at this point in time. TRATON is expecting unit sales to decline substantially in the current quarter and this will have a negative impact on all the key performance indicators.

The Corona crisis has simultaneously brought production to a standstill, disrupted supply chains, and triggered a collapse in demand. “If a fleet modernization programme can be initiated quickly across the whole of Europe, it will be possible to replace trucks weighing more than 6 tonnes on Europe’s roads (these now have an average age of 12 years) with more economical models. This would not only create jobs in the forwarding and commercial vehicle industries, but also help the European Union to meet its environmental targets,” said TRATON CEO Renschler.