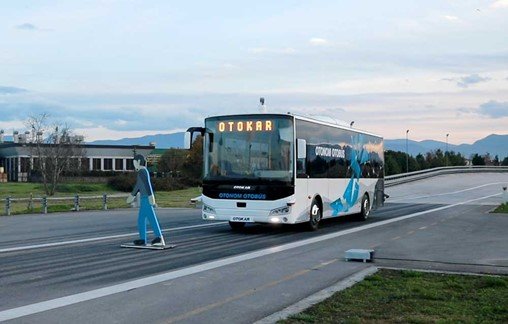 Otokar announced in a recent online press conference that it increased its sales in 2020 despite the Coronavirus pandemic and said it maintained its leadership in the Turkey bus market. Also the Turkish based bus manufacturer announced the successful completion of testing autonomous vehicles. This project is a cooperation between Otokar and the Okan University in Turkey. Although the company has delivered right-hand drive vehicles in the past to the UK and Malta, no announcement was made about any plans to expand into Ireland.

Evaluating the effects of Coronavirus in 2020, Basri Akgül, Deputy General Manager, said that, as the Turkish transport website DevirSaati reports: “From the very beginning of the Covid-19 process, we have taken all necessary measures to protect the health of our employees and business partners. We had to suspend production between 25 March and 20 April. After 20, we started our production again on a low level but it continues now without interruption.”

Basri stated that the recovery in the market started in June. “The year 2020 started well and the market was up in the first three months, but recession occurred in the second quarter due to the impact of the pandemic. The market started to recover rapidly in June. There was a significant increase in demand especially in service transportation. In November, recovery in all segments decreased. When we look at the whole year, the whole bus market, including the intercity segment, grew close to 14 percent. A growth of approximately 2 percent was achieved in the total of the segments in which we operate.”

Otokar, which has allocated 8% of its turnover to R&D activities in the last 10 years, has also undertaken pioneering works in the coronavirus pandemic, Akgül noted that they developed a “Safe Bus” to minimize the Covid-19 contamination threat in urban public transportation. “Safe Bus can disinfect itself; offers a safe travel opportunity with the photocatalytic system; It can measure the temperature of the passengers, control the mask, and protect the driver more against contamination risk with the new generation driver’s cabin. “Safe Bus” started to serve for the first time in the fleet of Izmir Metropolitan Municipality. Furthermore an automatic sterilization system was integrated into 50 buses delivered to Malta. This system, which is automatically activated in the garage prevents the spread of viruses and bacteria on all interior surfaces of the bus by spraying disinfectant.”

Also Otokar introduced the first 12-meter electric bus “Electra City” in the Turkish market and concluded in corporation with Istanbul Okan University the testing of autonomous vehicles in software integration and driverless verification tests, even at low speeds. It is the result of the University-Industry Cooperation Support Program with Okan University which started in 2018: “Next Level in Developing Autonomous System Bus”.