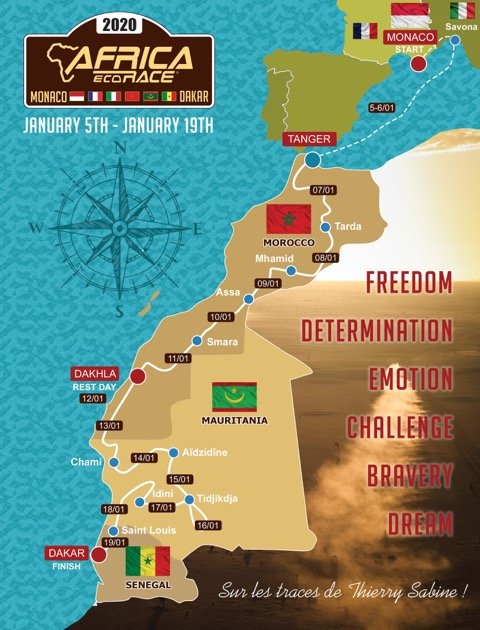 Exciting innovations to a new route for the 2020 Africa Eco Race have been announced, with a night start planned in the Principality of Monaco on January 4th before the finish on the shores of Lac Rose in Senegal on 19 January

The recce team has just returned from a comprehensive survey of the potential route in North and West Africa and some, but not all, details are released.

After technical and administrative checks in Menton on 3/4 January, cars, trucks, motorcycles and quads will be placed in a Parc Fermé located on Quai Antoine 1st in Monaco. They will then cross the start podium in Monte-Carlo surrounded by friends, family, sponsors and a growing audience of spectators in one of the world’s most iconic motor sporting hubs before embarking upon some of the most rigorous challenges that Africa can throw at them over the subsequent two weeks.

The Africa Eco Race caravan will then board a new ferry from shipping company Grimaldi and embark upon the Mediterranean crossing to Africa on 5 January. The entourage will travel 128km to the port of Savona in Italy for a 09.00hrs departure. The ferry is scheduled to arrive in Tanger early on the morning of 7 January.

Competitors will have two days to meet their rivals, liaise with the organising team led by Jean-Louis Schlesser and René Metge, familiarise themselves with the GPS/ERTF navigation equipment and attend the general briefing and meetings on board the vessel. Ahead lies over 4,000km of selective sections through Morocco and Mauritania before the finish at Lac Rose.

The opening stage on 7 January will be a short one through a forest before the caravan heads south-east to the first bivouac. This will be located for the first time near the Berber city of Goulmima in the province of Errachidia. The liaison will be a long one to the Drâa-Tafilalet region to avoid the traditionally low January night-time temperatures in the northern Moroccan deserts.

Both Schlesser and Metge harboured a desire to return to the mythical Mauritanian desert settlement of Tidjikja, one of the remotest and most famous Saharan outposts used during previous authentic Dakar rallies.

Many of the great stage performances by former Dakar competitors took place in the towering dunes and punishing sandy terrain that surrounds the historic city on the Tagant plateau and the dream will become a reality in 2020 when the Africa Eco Race sets up camp close by for the only loop stage of the rally. Rally officials are planning two sandy stages across stunning terrain through this region of the Mauritanian desert.