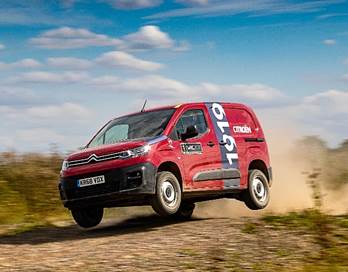 The new Citroën Berlingo Van has been put through the ultimate test, with a little help from the Citroën World Rally crew, Esapekka Lappi and Janne Ferm. Hot from their podium finish at Rally Finland, the pair spent a day at Langley Park Rally School in Essex, putting the multi-award winning Berlingo Van through its paces. Testing the van’s robust construction, safe handling and Citroën Advanced Comfort features, Lappi and Ferm didn’t hold back as they traded their C3 WRC for the brand’s best-selling LCV.

Encouraged by the long list of industry award wins since its launch last year – including International Van of the Year 2019, Citroën UK was keen to test its best-selling Berlingo Van to the limit. The ‘Worker’ version was selected because of its suitability for rough terrain, including use on building sites and unmade country roads.

Berlingo has been a cornerstone of the Citroën range since 1996, with more than 3.3 million sales in total including the passenger car version.

Esapekka Lappi, Citroën Total World Rally Team driver, said: “I was surprised that Berlingo Van handled the rally stage so brilliantly. The van was strong, very comfortable to drive and managed the corners exceptionally well. I might not swap my C3 WRC for a Berlingo, but it would definitely be useful as a reserve option!”