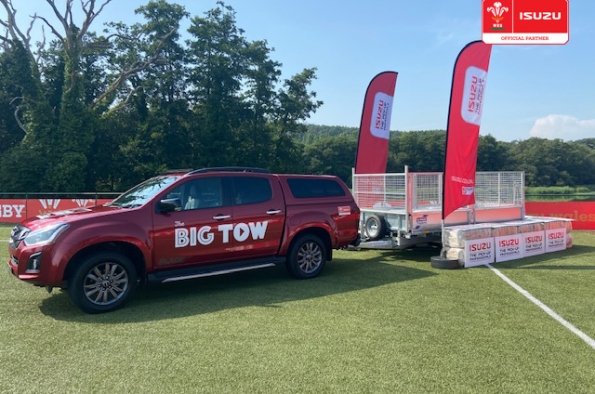 Isuzu is the main partner of the Wales Rugby Union (WRU) and official shirt sponsor.  As ambassadors of the brand, Jones and Navidi both drive Isuzu D-Max Blade pick-ups but had never tried towing before so the pick-up makers turned to Ifor Williams Trailers to help showcase the load carrying capabilities and agility of its D-Max Blade in the ‘Big Tow’ extravaganza.

The event saw Jones, the world’s most-capped lock forward and Wales’s most-capped international player, and flanker and former Wales U-20 captain Navidi, safely hitch up their trailer before negotiating a tricky slalom course in a D-Max Blade while towing a LM125 trailer with mesh sides. The rugby stars then had to reverse into a narrow bay to load up with rugby equipment before making a speedy return through the slalom – all against the clock – in a drama-fuelled finale.

The competition was judged by Isuzu pro-driver Jason Sharpe, who was left more than impressed with their efforts.  Praising both players, Jason summarised that “Josh went out first and was really smooth and pretty quick through the slalom”.  He added that Alun Wyn “did the really good reversing manoeuvre – I think he only had to go forward once, maybe twice”.  Amid much banter, competitiveness and deliberate ‘diversionary’ tactics, including Jones’ cheeky quip that Navidi had left the handbrake on the trailer, resulting in him getting out of the cab to double-check, Navidi triumphed in 4 minutes 37 seconds – just four seconds faster than his opponent.

Asked what they liked best about the D-Max Jones said: “I think it’s the versatility. Obviously, the cab is pretty stacked with add-ons but I think having a couple of kids and going to the beach, the park, all the paraphernalia you take with you, it helps to keep it separate from the cab area. Obviously, day-to-day, when I’m training, with kit and boots, whatever equipment I may need, to keep that in the back makes it really easy to go from A to B.”

For Navidi, it was all about the sound system and ‘mod-cons’: “I’m big into my music so I’ve always got it blasting and also the tub in the back is handy for me with my surfboards,” he said.  “I can just throw them in the back with my wetsuit and obviously my rugby kit as well.”