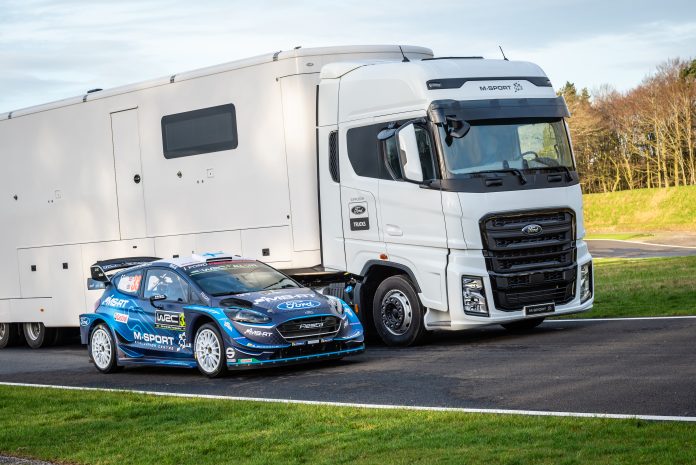 Two examples of the new Ford Trucks F-MAX, reigning International Truck of the Year (2019) were presented to Malcolm Wilson, Managing Director, M-Sport at the company’s headquarters at Dovenby Estate in Cumbria last week.

F-MAX, has become one of the key assets in the global expansion of Ford Trucks with features that redefine the level of competition in the international road transport industry. Following the success enjoyed in the Middle East, Africa, Russia and Turkic Republics, Ford Trucks is achieving rapid growth in Europe with the opening of new dealerships.

“We will go a long way toward increasing our market share by reaching our target audience directly. As a company that combines 60 years of experience with the capabilities to manufacture products tailored to different export markets, Ford Trucks continues its global expansion,” explainedSerhan Turfan, Vice President, Ford Trucks.“The recognition and popularity that the all-new F-MAX, which we designed and developed from scratch, has gained in the global arena is the driver of our international expansion efforts.”

Ford Trucks aims to increase the number of markets in which it operates from 36 countries to over 50 by the end of 2020.

Growing in size and stature since originally formed in 1997, M-Sport now operates a flourishing global motorsport business on the stages and circuits of some of the world’s most acclaimed motorsport series. Providing the engineering expertise behind the award-winning range of Ford rally cars as well as the Bentley Continental GT3, together with an involvement with the Jaguar I-Pace  eTrophy Electric Racing Series, M-Sport has quickly become an industry leader – delivering winning performances around the globe.

See and hear how the two Champions are about to work together from Malcolm Wilson in this video footage.

Full report on the visit to M-Sports HQ in Fleet Transport soon!