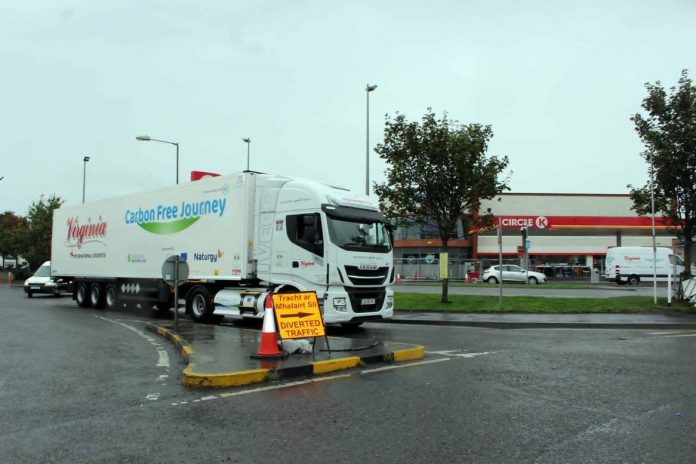 Virginia International Logistics has become the first haulier in Ireland to complete a zero carbon Heavy Goods Vehicle’s (HGV) delivery to Europe. The trucks were fuelled by compressed renewable gas also known as Bio Compressed Natural Gas (CNG) to transport freight to the continent.  The first European load was a consignment of processed beef from Liffey Meats in Ballyjamesduff going to Caen in Northern France.  The total round trip is 1,121 km.

Ireland’s commercial transport fleet makes up just 3% of vehicles on the road, yet is responsible for approximately a fifth of transport’s carbon emissions.  Switching to CNG can reduce a HGV’s emissions by up to 22%.  By using bio CNG in the same vehicle, the carbon emissions are eliminated. These new vehicles also run more quietly reducing noise pollution.

This journey was powered using certified renewable gas purchased from biomethane producers in Europe and delivered to Virginia International Logistics through Gas Networks Ireland’s gas network.  There is however significant potential to produce indigenous renewable gas in Ireland at a lower cost.

The Government’s Climate Action Plan commits to setting of a target by the end of this year for renewable gas on the network by 2030. It also states the need to establish the necessary supports to deliver this target. Gas Networks Ireland fully supports the setting of a challenging target and corresponding support scheme.

CNG for transport is one of the key gas technologies set out in Gas Networks Ireland’s Vision 2050 published this week which outlines how it can reduce Ireland’s total carbon emissions by one third and create a net zero carbon gas network.

Ian O’Flynn, Head of Commercial and Corporate Affairs at Gas Networks Ireland said: “Ireland’s transport emissions continue to rise, while this is the by-product of much welcomed economic and employment growth, as a country we face significant challenges to meet our emission reduction targets. Gas Networks Ireland is leading the development of this new, cleaner transport network, to support Ireland in reducing its carbon emissions and to give Ireland’s fleet operators sustainable energy options.”

Virginia International Logistics has been focussed on reducing the emissions from their fleet since 2012.  In 2012, they invested in dual fuel vehicles and last year, they made the switch to Compressed Natural Gas.  By December of this year, they are aiming to have 30 low carbon CNG trucks on their fleet. All of these trucks can run on renewable gas.

Ray Cole, Transport Director, Virginia International Logistics said “This is the latest low carbon milestone for Virginia Transport.   Transport is changing and we are proud to be leading the way in Ireland in moving to a cleaner energy future.  We are proud to be able to deliver for Liffey Meats and other customers in the most sustainable way by offering zero carbon shipping, in Ireland, the UK and onto the continent”

The expansion of the Virginia Transport fleet and the installation of the re-fuelling technology is supported by Gas Networks Ireland.  Gas Networks Ireland is developing a network of 150 CNG stations in Ireland.  The first public CNG fuelling station in Circle K Dublin Port opened earlier this year.  A further six public stations are in planning and development.