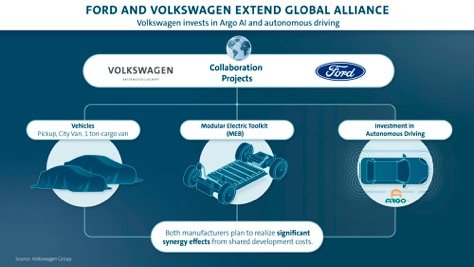 In a surprise announcement last year, Volkswagen and Ford released initial details of a comprehensive joint venture, collaborating on electric and light commercial vehicles and taking steps together towards developing autonomous driving.

The contracts that have now been signed between both brands and form the basis for a total of three vehicle projects to be run by Ford and Volkswagen Commercial Vehicles (VWCV). In addition to the already agreed co-development of the 1-tonne Pick-up, the projects for a city delivery van and a larger van in the one-tonne segment are now starting up.

Thomas Sedran, Chairman of the Board of Management of Volkswagen Commercial Vehicles explains: “The collaboration with Ford is an important building block of our GRIP 2025+ strategy for the future and thus part of the transformation process that VWCV is currently going through. Over the coming years, the cooperation will strengthen our strong position in the area of light commercial vehicles, especially in our core European markets. The partnership with Ford is designed for the long term and the contracts that have now been signed are for me the proof that we are successfully implementing our plan step by step.”

As lead partner, Ford will produce the new version of the Amarok for Volkswagen Commercial Vehicles based on the Ranger. The Amarok successor will then be made as of 2022 at Ford’s Silverton plant in South Africa. “What is important for both partners is the utilisation of the same platform. At the same time we will both be able to fully deploy our strengths. Through custom designs and interfaces we will clearly differentiate the two models. For us as Volkswagen Commercial Vehicles, our sights with the Amarok successor are on our main markets, above all in the EMEA economic area (Europe, the Middle East and Africa). Ultimately it is our customers who will benefit, as without the cooperation we would not have developed a new Amarok,” added Mr. Sedran.

The basis has also been laid for two further vehicle projects: Volkswagen Commercial Vehicles will develop a city delivery van based on the Caddy 5 unveiled last February. This will be produced in Poland as of 2021 for Ford to incorporate this van into its range as the Transit Connect. Ford will therefore be launching the first vehicle to come out of the cooperation with Volkswagen Commercial Vehicles.

At the start of the month the contracts on cooperation in the area of development of autonomous driving were also signed and Volkswagen Group subsidiary AID incorporated into ARGO AI. The basis has thus been created for a company aimed at the development of autonomous driving that will operate on a global scale. Both partners will in future be able to use the software and the self-driving system (SDS) in their own bespoke way. VWCV is responsible within the Volkswagen Group for the development of autonomous driving in the Mobility as a Service / Transportation as a Service (MaaS/TaaS) field for automation Level 4. Thomas Sedran: “In 2022, we will be deploying a self-driving vehicle fleet in real conditions for the first time. This test will be the first Level-4 deployment using our fully electric ID.BUZZ vehicles. We’ll be collaborating closely on this with ARGO. In addition, I’m sure that ARGO is going to take a leading role in the development of self-driving systems in the entire industry, from which Ford and we will benefit greatly.” 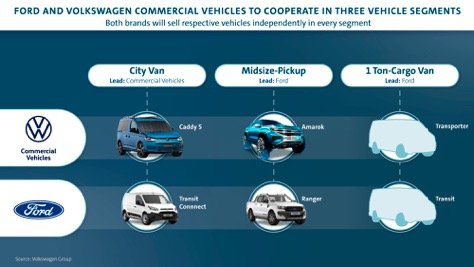