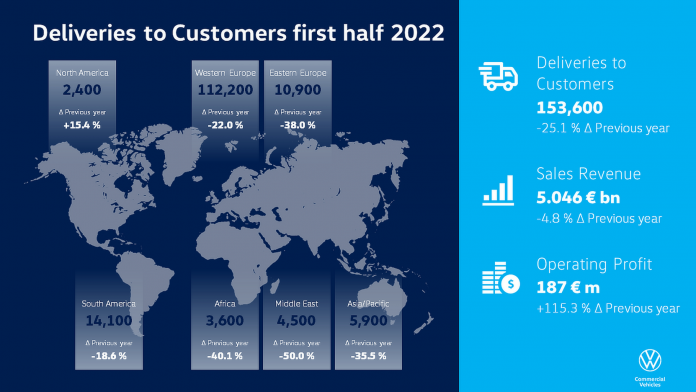 Volkswagen Commercial Vehicles (VWCV) has continued the previous year’s positive earnings trend in the first half of 2022 and has more than doubled its operating profit, which rose by 100 million euros (+115,3 per cent) to 187 million euros. This is thanks to various factors: for one, the used vehicles and aftersales business both made very significant contributions in the first six months of the year, which boosted earnings considerably. For another, the market prices for vehicle sales held steady.

This also brought about a marked improvement in the return on sales in the first half of 2022, which climbed (from 1.6 per cent in the previous year) to 3.7 per cent. However, the challenges facing production, due to semi-conductor shortage and not least to the impact of the war in Ukraine, continued to disrupt supply chains in the second quarter of 2022. This extended manufacturing and delivery times once again, including for Volkswagen Commercial Vehicles, which pushed total deliveries to customers down to 153,600 vehicles in the first half of the year (previous year: 205,000). Sales revenue fell by 252 million euros to 5.046 billion euros as a result.

“The environment remained challenging for VWCV in the first half of the year and resulted in a drop in deliveries. On the financial side, by contrast, we im- proved our operating profit once again. As well as stable market prices for our vehicles, our strong used vehicles business and our aftersales also played a key role. What’s more, VWCV benefited from the rigorous cost discipline that we’ve made an integral part of our corporate strategy” explained Michael Obrowski, Member of the Board of Management for Finance and IT at Volkswagen Commercial Vehicles.

“It’s clear that deliveries to customers are falling short of our targets,” explained Lars Krause, Member of the Board of Management for Sales and Marketing at Volkswagen Commercial Vehicles. “Despite the drop, however, we even succeeded in increasing our total market share slightly to 13.6 per cent in the European Economic Area by the end of May. This is a clear sign of our brand’s strong sales performance. We’ve embarked on a comprehensive programme of measures for the second half of the year in order to ramp up our production output and thus our deliveries to our customers in particular.”

World premieres for the ID. Buzz1) and Amarok3)
Back in March 2022, Volkswagen Commercial Vehicles and Volkswagen unveiled the ID. Buzz1) and ID. Buzz Cargo2)Europe’s first-ever series of fully battery-electric buses and transporters respectively. Advance sales began in May, followed in June by the production launch at VWCV’s Hannover plant. The first deliveries, to the company’s core markets in Europe, will be made in autumn 2022. For VWCV, the ID. Buzz1) represents a key milestone on its journey towards electrification and shaping sustainable mobility. In July, VWCV celebrated the digital world premiere of its new Amarok3), the brand’s premium pick-up. In addition to its unique design, the completely new Amarok 3) features numerous highlights and brings many technical innovations with it into the pick-up B-segment. Like the ID. Buzz1), the new Amarok3) will also make its market debut in its first countries towards the end of the year.

“With the ID. Buzz and the new Amarok, we’ve introduced two very important vehicles for our brand,” Lars Krause said. “The ID. Buzz is the all-electric, digital inter- pretation of our iconic ‘Bulli’. It’s paving the way to sustainable mobility and will also underpin our development activities in the field of autonomous mobility services. As such, the ID. Buzz is also a vital component in the Volkswagen Group’s NEW AUTO strategy.”