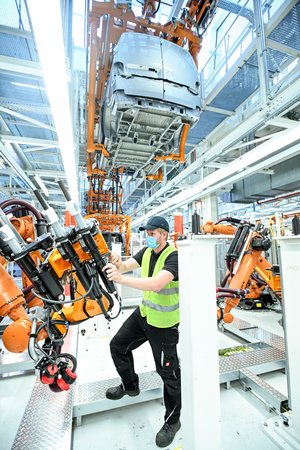 Over 500 modernisation and maintenance tasks completed in four weeks

Preparations for the new Multivan and all-electric ID. BUZZ on schedule

Annual reduction of around 4,200 tonnes of CO2 from measures taken in press shop

Massive modernisation of Volkswagen Commercial Vehicles’ production operation in Hannover: the brand traditionally utilises the annual vacation corridor in the summer to take numerous remodelling and maintenance measures in vehicle production. The focus this year was on the production facilities for the future Bulli family models: the successors to the current Multivan (as of 2021) and the ID. BUZZ (as of 2022).

Volkswagen Commercial Vehicles continues to press ahead with the ongoing modernisation of the Hannover site. Dr Josef Baumert, VWCV Brand Board of Management Member for Production and Logistics: “With the current measures we are systematically further implementing our strategy of automating and digitalising production. We are completely remodelling the production facility in Hannover, so that in future, in addition to our successful T 6.1 models, we are able to build two further vehicles here in one factory: as of next year the new Multivan as an internal combustion engine version and a hybrid, and ultimately our all-electric ID. BUZZ. A clear sign of our commitment to the future of this plant.”

During the three-week break in production (calendar weeks 31 to 33) and one further week with a reduced level of production over 500 individual measures have been taken related to the maintenance and modernisation of the production facility. The core focus here is on integrating the new Multivan and all-electric ID. BUZZ into the production process.

Plant Director Thomas Hahlbohm: “By disassembling old machinery and setting up new production lines we are making the future for our plant now finally visible. In all areas of vehicle production over 2,000 people are in the process of setting up machines for the future model ranges or integrating them into the existing processes.”

Measures carried out at the plant over the last three weeks include the following:

Disassembly of Amarok machinery in the body shop, paint shop and assembly facility. Parts of the ID. BUZZ production line are being set up here in the future. This work affects in total an area of around 34,000 square metres.
Construction and commissioning of machinery for the new Multivan in the body shop, paint shop and T production assembly facility.
Disassembly of an old press line in the press shop: due to using the PXL (begun in 2015) and the modernisation of press line 100 (this year) an old press line is no longer being used and is being disassembled. As a result of doing away with the old presses and the increase in the energy efficiency of the existing machines in the press shop, CO2 is being cut by around 4,200 tonnes a year.
Adaptation and alteration of the conveyor equipment inside the paint shop for integration of the new Multivan and in the assembly facility as a prerequisite for integrating the ID. BUZZ.
Construction of a new bi-colour painting facility for current T family models, the new Multivan and the ID. BUZZ.
There are some production lines on which from 2021 the T6.1 and its successor (with internal combustion engine and as a hybrid) will be produced simultaneously. This affects in particular processes in the assembly operation. During the works holiday numerous projects relating to the integration of these new aspects into the vehicle assembly process were completed.