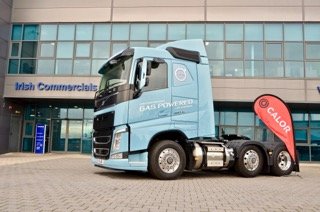 As new truck launches go the Irish reveal of the latest model Volvo FH was a relatively low key event. Nevertheless, if the latest edition to the Volvo Truck series, which by the way celebrated its silver anniversary last year, proves popular in Ireland, the launch day could be remembered as one of historic significance. The reason is that the new FH with its D13 engine is gas powered, and interestingly with Liquified Natural Gas (LNG). This is somewhat unusual as there are no LNG filling stations in Ireland, as yet.

At the launch were representatives from Calor which is currently developing plans to rollout an LNG refuelling network at a number of key locations across the country. 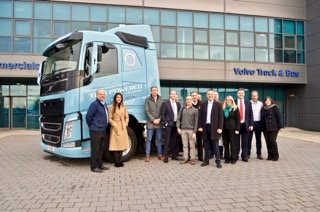 For LNG suppliers one important advantage with this gas is that it can be delivered to a location and does not need to be on the regular gas (mains) network, which of course adds great flexibility when selecting potential locations. The first station located at Dublin port is expected early this year.

The event attracted a number of interested operators to Volvo Truck dealer Irish Commercials. They came to hear how the infrastructure is developing, and to see how LNG might work in their business, and what are the timelines to realise a reasonable return on the investment.

The LNG powered FH further widens the alternative fuel options for operators. With a 4.1 metre wheelbase, and depending on axle configurations of 4×2 or 6×2, it is possible to spec tank capacities of 115,155 or 205 kgs, allowing ranges of 500/600/ and 800 kilometres respectively. The FH LNG still requires an amount of diesel (approximately 5%) to initiate ignition, and will therefore necessitate an amount of AdBlue. Nevertheless, as the move against diesel appears to be continuing, the move towards alternative fuels may need to gather pace. Certainly the new FH LNG could quicken that move – once the infrastructure is in place. Paul White

A6 upgrade to give trade in Northern Ireland & North West...