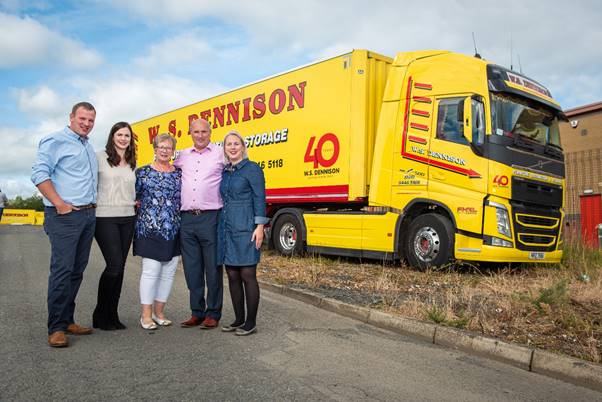 Award-winning furniture logistics company, W.S. Dennison, recently celebrated 40 years in business with a family fun day for friends, family and other business associates that “helped to build the business.”

The event took place at the company’s premises in Antrim and was attended by around 150 guests, including staff from the company’s Limerick depot. As part of the anniversary celebrations, the company opted for a special 40th anniversary logo, which has been added to some of the 23 vehicle and 65 trailer fleet.

William Dennison commented on the significance of the occasion: “Although there have been highs and lows over the last 40 years, we are extremely proud to have reached this milestone and we were delighted to be able to share our celebration with those that have helped us to build the business.  As well as strong family support, both within the business and in home life, we have had the support of many local businesses over the years.”

W.S. Dennison was founded in 1979 by Managing Director, William Dennison, who was quickly joined by Transport Manager, Liam Taggart.  The company remains family owned and as well as being regarded as the leading furniture storage and logistics company in Ireland, now also provides domestic and commercial removals and storage.

During the day, the company raffled an impressive range of prizes, which were kindly donated by suppliers and customers.  The proceeds of the raffle, which reached £2,000, will be split between Macmillan Cancer Support and Parkinson’s UK.