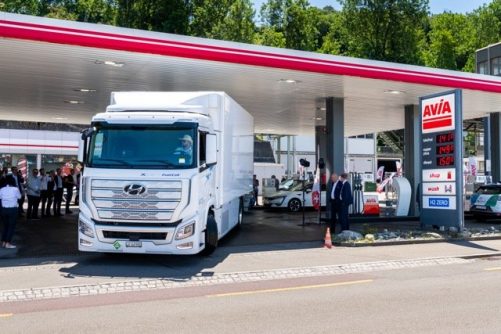 Hydrogen has a long and unsuccessful history in the transport industry and other mobility solutions. But now, two years after its initial presentation at IAA Commercial Vehicles Exhibition in Hannover, Germany in 2018, the joint project of the Swiss start-up H2 Energy and of Hyundai Truck & Bus along with a number local operators in transport is entering the reality phase.

Truck makers and energy providers were reluctant for some time to introducing hydrogen (H2) in road transport. Not so long ago a change in perspective occurred, and now many players in the automotive industry seems to turn to hydrogen and fuel cell as an alternative energy source. While most of the big commercial vehicle brands are aiming for tangible results from 2025 onwards, not so in Switzerland; thanks to the long and relentless effort of H2 Energy, a small start-up company in Zurich.

There is a major problem when deploying hydrogen and fuel cell vehicles. Typical chicken and egg scenario. With no filling stations, there are no vehicles. And with no vehicles, there are no filling stations. Who is the one who takes the necessary first step? The success of the project in Switzerland lays in the effort to unify all parties involved, from truck maker to hydrogen production to hauliers and filling station chains, in order to create an environment for everybody to gain profit of and to make it happen for all at the same time.

The push from Hyundai Hydrogen Mobility (HHM) and the Swiss players to create a viable economy for hydrogen in the transportation sector is paying now. On the 7 July, an important step was taken. In St. Gallen, in the eastern part of Switzerland, the second commercial filling station for hydrogen was inaugurated. Before the end of the year four additional stations will follow along the main traffic axis east-west, making it six stations between Lake Constance and Lake Geneva. More stations are already in the planning stage and by 2023 the hydrogen-supply should reach a nationwide level. Unlike other countries, in Switzerland Government incentives did not apply to deploy this advance technology and infrastructure, because these main Swiss players are convinced, that “only the commercial orientation will assure continued success for such a project.”

With the rollout of the filling stations all three sectors of the circular economy are playing out their active role now, complementing the sectors of the truck and of the production of hydrogen. The so-called H2 Mobility Switzerland project (Förderverein H2 Mobilitaet Schweiz) combines all major service station operators, many big Swiss hauliers and major retailers – all those who use the hydrogen and the trucks. The first vehicle arrived on the 18 February. The Hyundai Xcient Fuel Cell is not yet a customer’s truck but is being used by the South Korean manufacturer to run test trials. This helps to finalise different calibrations of the truck before serial production starts on a big scale. And these tests are essential for the technical matching of vehicle and infrastructure, aligning the necessary protocols between the trucks and the filling stations.

At the same time as the inauguration of the new filling station in St. Gallen, Hyundai was shipping the first 10 Xcient Fuel Cell trucks from South Korea to Switzerland for customer applications. These serial trucks will start running daily operations by the end of September. Towards the end of 2020, a total of 50 customer trucks are projected to be in operations in Switzerland. Another 150 trucks are planned for 2021 and the programme provides a total of 1,600 Xcient Fuelcell to be deployed in Switzerland by the end of 2025.

The supply of green hydrogen is provided by the joint venture Hydrospider. The first electrolyser (max power 2 MW) is up and running at the hydroelectric power station in Goesgen since this April and it produces up to 300 tonnes of green hydrogen per year. This is enough to supply 40 to 50 fuel cell trucks or theoretically up to 1,700 fuel cell automobiles. A second production is on its way in the proximity of the new service station in St. Gallen, and it should be operational in about one year’s time.

It is essential for the Swiss project that the trucks remain under the ownership of Hyundai Hydrogen Mobility. The costs are being charged pay-per-use; for this reason hauliers and retailers negotiate their specific transportation tasks with HHM. From this negotiation HHM fixes a specific price per kilometre, which includes the hydrogen and all service and support of the trucks. The service-stations allocate the filling costs to HHM directly, not to the haulier. This procedure allows a precise calculation of the Total Cost of Ownership (TCO) for the haulage company and helps to forecast the quantity of hydrogen to be used. In addition, the service-stations negotiate the purchase price for hydrogen with Hydrospider and they resell it with a reasonable surcharge to HHM. To become profitable, despite the high initial costs, a filling station needs not more than 10 to 12 trucks based on their service area. But all filling stations are not only equipped with nozzles for 350 bar pressure for trucks, but with nozzles for 700 bar pressure for cars. This prepares the ground for fuel cell cars in Switzerland.

The key for this commercial oriented project lays in the Heavy Goods Vehicle Tax (LSVA, Leistungsabhängige Schwerverkehrsabgabe) in Switzerland, which is waived for trucks with zero emissions. This emission tax saves a substantial amount of money, allowing Hyundai to balance the higher cost of the new technology of the fuel cell trucks, bringing the TCO near to par with a traditional diesel truck. New projects in other countries should have a similar philosophy, with the same financial impact as the Heavy Goods Vehicle Tax in Switzerland in order to get the necessary commercial orientation. A new project has started in Norway with the Green H2 Norway joint venture. The game changer in Norway is the lower production cost of hydrogen because of the low electricity price. 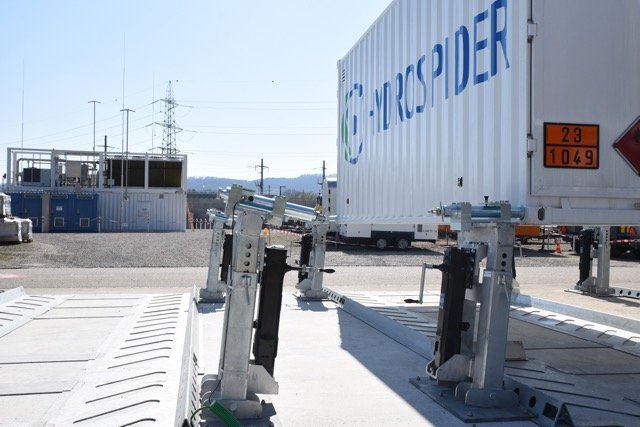