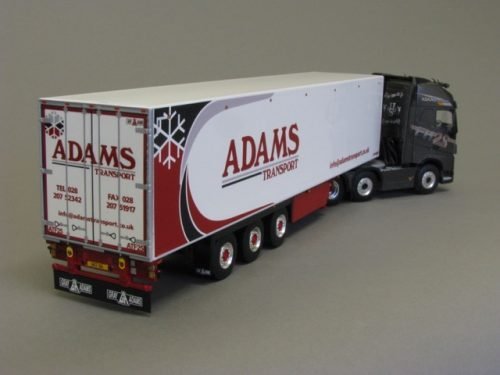 The models have been produced exclusively for Search Impex by WSI Collectibles as a certificated Limited Edition (175 pieces). And ‘Fleet’ readers can win one of these special editions by entering an on-line competition!

Based in the village of Armoy, County Antrim, Adams Transport was established in 2007 by John Adams. With a passion for trucks from an early age, John had been driving rigid trucks since he was first legally able to do so and he quickly moved onto driving artics from the age of 21. After some years of driving for other companies, however, John found he was increasingly spending extended periods away from his wife and young family and so he began to think of ways of changing his lifestyle so he could spend more time with his family. With a view, therefore, to taking back control, he made the decision to set up on his own – and so Adams Transport was born.

Sheer hard work and dedication, supported by a team of loyal staff, has seen the business grow solidly and successfully over the last 12 years. The family firm specialises in the delivery of agricultural goods throughout Ireland, as well as undertaking general haulage work. With a fleet of 15 trucks (almost exclusively Volvo) and a similar number of trailers (a mix of fridges and curtains, plus one flat bed), Adams transport trucks can be seen regularly on the roads throughout Ireland and also across the UK – from Scotland down to the Midlands and beyond.

Adams Transport took delivery of the Volvo FH 25 Year Special Edition (the first to be ordered by a Volvo Trucks customer) to commemorate the life of John Adams’ late wife, Gillian Marie, who sadly passed away in 2015.  Dedicated to his wife’s memory, the unique new 25 Year Edition flagship truck is especially poignant to John – as 2019 would also have seen the couple’s 25th wedding anniversary. With the exception of the new flagship Volvo FH, the other trucks in the fleet run in Adams Transport’s smart corporate red livery. Thus far, fridge trailers have usually been plain, with livery applied just to the back doors – but all of that may soon be changing!  The arrival of the new Volvo also led to a rethink about corporate branding and this resulted in a decision to design a smart new trailer livery.  The first fridge trailer in the new design will be arriving in the fleet very soon – so keep an eye out for it!  When coupled with the Volvo 25 Years Special Edition truck, it will certainly make for a very classy combination.

Models, available from Search Impex, are priced at £149 each (including UK delivery & VAT (£6 extra for Rep. of Ireland)). For details of availability of this and other models, collectors can visit the Search Impex website at www.search-impex.co.uk or call them on 00441332 873 555.

To win one of these exclusive models please email your name, address, workplace, and mobile number to enquiries@fleet.ie by Wednesday next 29 April.