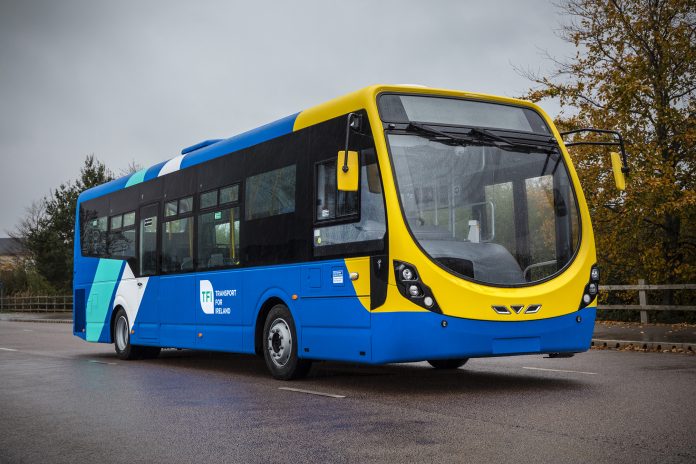 A StreetLite single deck bus, which is part of an order of 88 for Transport for Ireland (TFI), will feature on the Wrightbus stand at this year’s Euro Bus Expo.

Being presented in the new livery for vehicles operating in the NTA’s Transport for Ireland branded bus services, the bus is replacing the States of Guernsey StreetVibe that was originally scheduled to appear at the exhibition, but is now unavailable due to customer delivery fulfilment requirements.

The show vehicle has been built in the ‘door forward’ layout and has an overall length of 10.2m with a width of 2.48m. It is also available as 9.6m, 10.8m and 11.5m versions. Additionally, the bus benefits from an enhanced steering lock angle of 49 degrees which provides an improved turning circle. Rear axle differential options can be supplied to maximise efficiency and fuel economy for operators. StreetLite also comes in a ‘wheel forward’ format with 8.8m and 9.5m lengths if required.

StreetLite offers fuel economy with low emissions, which are achieved by reducing power consumption by a combination of low weight, an efficient driveline and other advanced technologies from the Ballymena manufacturer.

Featuring Wrightbus’ Micro Hybrid system version 2, the StreetLite is fitted with a Daimler OM934 Euro VI, engine with a power rating of 208hp and a Voith D824 gearbox. A key benefit of the Daimler power unit is that is has the ability to handle high combustion pressures as well as improved maintenance intervals of up to 20% longer than previous models. Twin turbo performance with a constant power curve across a broad engine speed range provides exceptional driveability. Adblue consumption is 50% less than the Euro V predecessor.

Passenger capacity options are 32 seated and 43 standing or 31 seated with 44 standees and all seats are fitted with integrated USB ports. Additional passenger benefits include WiFi system, LED passenger information displays mounted at the front side and the rear of the vehicle and LED interior saloon lighting.

Wrights Group Business Development & Product Development Director, John McLeister, said: “This StreetLite is part of a significant order for Transport for Ireland and it is great to see it on our stand at Euro Bus Expo before it goes into service.

“With its outstanding fuel economy rating and low emissions, alongside the use of our Micro Hybrid technology, means it is one of the most environmentally friendly vehicles available in the UK and Ireland market today. We look forward to a continuation of our long and fruitful relationship with Transport for Ireland.”

Other features of the StreetLite include electric power assisted steering and a spacious driver area with dedicated fresh air system, as well as a Synectics 7 camera systems with driver’s monitor.

Return to centre and road stability characteristics are included to reduce the amount of steering relays which in turn reduce hub offset by 20mm. This increases the Kingpin inclination to five degrees while featuring direct drive into the steering box from the wheel.

Wrightbus’ Micro Hybrid technology was developed to recuperate energy generated through the vehicle braking and then reuses it to provide additional power to the bus.

The Next Bus is Coming!

When the new Government is formed, it must support the Bus & Coach Industry – CTTC

Webinar: How to restart bus operations after a lockdown?

Truck technology is evolving on many fronts