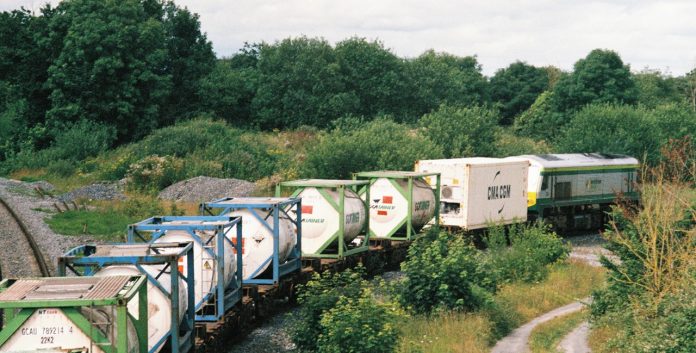 A modest start for the ‘International Warehousing & Transport’ (IWT) intermodal train in 2008 has blossomed into a major operation in the last ten years.

The first IWT train departed from the Alexandra Road tramway in Dublin Port on 19 August 2008 to convey ISO containers to Ballina in County Mayo. Then two trains per week were run in each direction. The loading in Dublin Port took place in less than ideal conditions on the Alexandra Road tramway. The anchor customer back then was the international soft drinks factory based in Ballina – and that remains the case 10 years on.

The operation became much slicker when Dublin Port Company built itsnew quayside rail terminal which opened in May 2011. The number of units being moved increased and so did the number of rail services – up to nine trains each way per week now run depending on customer requirements. The number of rail services have risen for several reasons, primarily though due to the steadily increasing costs of road haulage making rail more cost effective. Fuel price rises and HGV driver wages over the last 12 – 18 months have resulted in more freight being transferred to rail, the mode being less susceptible to the increases in fuel prices.  With Lo-Lo container volumes increasing by 4.0% to 726,000 TEU in 2018, increased road traffic at Dublin Port has resulted in queues for terminals and increased congestion by HGVs. Transferring more freight to rail has helped to alleviate the traffic congestion around the port and reducing the terminal queueing times.

In the 10 years since inception 2,673 trains operated and the IWT intermodal trains have helped to reduce HGV movements on the roads between Dublin and the West of Ireland. Over the decade it is estimated that some 48,000 HGV journeys have been saved – and an equivalent reduction in carbon emissions made due to the lower carbon footprint of rail transport. The customer base has also expanded with other commodities regularly being conveyed including medical supplies. Loading of trains from Dublin Port averages 99% of space used. The Ballina rail freight terminal is now used as the railhead for the West and North West of Ireland.

In 2012, IWT purchased land adjacent to the freight yard for use as a storage facility and now make regular deliveries to Westport,Letterkenny, Tuam and Castlebar from it. The storage yard is used to ‘buffer stock’ allowing customers to store product close to production facilities thereby reducing lead time and eliminating costly storage charges at Dublin Port.

Iarnród Éireann/Irish Rail has been running trials to enable longer services to be operated and a 17% increase in train loading is expected to be permitted in the near future. With rail traffic carried by IWT increasing by 5% year on year, the future looks bright for this intermodal operation.

IWT was founded in 1981 and is a wholly Irish owned company with offices in Dublin and Rotterdam. In 2003 the then directors successfully launched a management buyout and have operated successfully since then. Tim Casterton