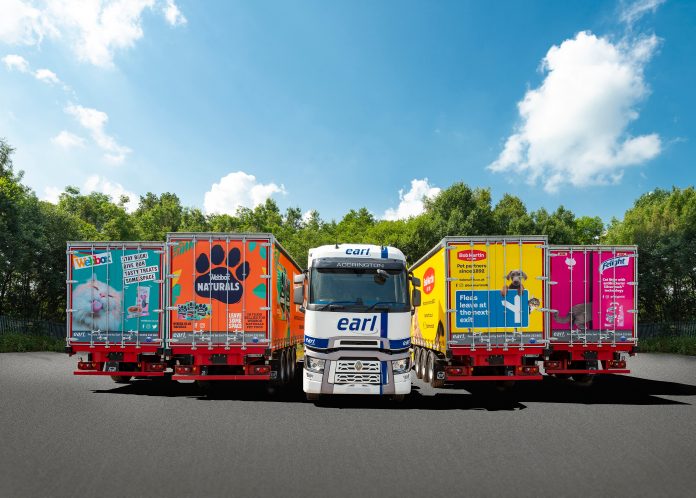 East Lancashire haulier Earl Transport has continued its long association with TIP Trailer Services with the recent arrival of 14 new SDC 4.2m curtain sided trailers that have been supplied by TIP on a five year leasing arrangement, which also includes full repair and maintenance cover for the duration of the deal.

All 14 trailers are working on a contract for leading UK pet food and healthcare manufacturer Pets Choice who has been a customer of Earl Transport for nearly 40 years. The new trailers feature a range of striking liveries each representing different brands in the Pets Choice portfolio.

“As part of our ongoing long term contract with Pets Choice, they approached us to add extra trailers to their distribution fleet to cope with the significant upturn in their business over the last 12 months. Without a shadow of doubt and based on our successful long term experience with them, TIP was the natural choice for us when it came to supplying us the new equipment,” said Peter Hughes, managing director, Earl Transport.

The relationship between TIP and Earl Transport goes back at least 20 years not just with TIP but originally with the Bell Trailers business who subsequently became part of the TIP organisation in 2015.

TIP has previously supplied trailers for Pets Choice via Earl Transport, most recently in 2018 when an arrangement for 10 trailers commenced. As with those, the 14 new additions will be maintained by TIP’s local depot in Nelson.

The new trailers will be operating out of the main Pets Choice distribution centre in Blackburn, Lancashire and are expected to cover approximately 80,000 miles per annum over their five year working life.

“The partnership with TIP works really well for us. Any request is dealt with quickly and efficiently. They are always interested in trying to help us and their positive approach to our business ensures we get the right deal every time,” added Peter Hughes.

Currently, Earl Transport run 22 tractor units supporting a fleet of 60 all-curtain sided trailers from its base in Clayton-Le-Moors, near Accrington, Lancashire.

“With over 20 years’ experience of their business, we are able to get closely involved with Earl Transport’s operation as they expand their business. These latest trailers, in really striking new liveries, reflect the strength of the three-party relationship between us, Earl Transport and Pets Choice, which has ensured that Pets Choice are able to operate their trailers in a manner that meets the needs of their specific operation, We look forward to continuing this relationship for a further five years, and more,” said Mike Furnival, managing director, TIP Trailer Services UK&I.