Groupe PSA’s Light Commercial Vehicle (LCV) electro-mobility technological developments have been acknowledged in winning the International Van of the Year Award 2021 (IVOTY). The highest honour in the LCV industry globally, which celebrates its 30th anniversary, was announced on 17 December, 2020 on-line. 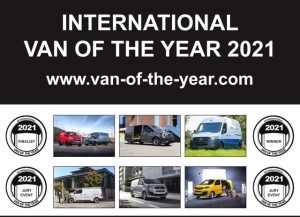 The French automotive company’s jointly developed Peugeot e-Expert, Citroën e-Dispatch/ë-Jumpy, Opel & Vauxhall Vivaro-e received the majority of first preference votes from the 24 member strong IVOTY jury with 131 points. The two finalists from Mercedes-Benz; the eSprinter and the latest Vito were second and third respectively on 55 and 36 points. Ford with its new Transit Active & Trail models were fourth.

The announcement was made on a special web based broadcast on the jury’s website – www.van-of-the-year.com by Jarlath Sweeney IVOTY Jury Chairman. Commenting on PSA’s achievement, the second such award in three years, Jarlath said: “Congratuations to Group PSA on its stringent research, development and investment on producing an excellent range of electric powered vans, that exceed expectations and without compromise.”

Xavier Peugeot, Senior Vice-President of Groupe PSA’s Light Commercial Vehicles Business Unit stated on receiving the news: “Groupe PSA is very proud and happy to receive this prestigious International Van of the Year 2021 Award and I warmly thank the jury members for having selected our vehicles. This award confirms the success of our Compact Van and the relevance of the electrification strategy we have designed for our LCV range – in which electrification means no compromises for our customers.”

The IVOTY 2021 trophy, dedicated to Anders Karlsson, the Swedish jury member who died recently, will be presented to Xavier at Groupe PSA’s headquarters in Paris, early in the New Year.

Motivations: Comments from Jury members on selecting the Groupe PSA electric van trio as the 2021 IVOTY:

“The PSA-quadruplets are the first electric vans in the market, to be sold across Europe with a range of more than 300 kilometres. They are solidly built with great driveability and except for the lesser noise-levels, there isn’t much separating the drive feeling from a diesel version.”

“With the all-electric version of their compact van, the PSA-quadruplets give a tremendous push for e-mobility in professional businesses and forces the democratization and scaling of the emission-free transport. From now on the business case is real and TCO can be on same level with ICE-versions. It is a convincing package with flexible two battery-concept, by far powerful enough, with a smooth and silent driveline and a consistent DC quick charger as a standard.”

“And so, PSA’s e-vans are setting a new standard – and pushing progress. That’s what a worthy ‘International Van of the Year’ title holder has to deliver. Even more so when each PSA brand has developed electric derivatives from panel van to people-carrier shuttle bus and offers almost the same payload and load area.”

“PSA has succeeded in bringing an e-van to the market which has all the qualities of an ICE-LCV but for the first time with a decent range distance. So, no more driving anxiety with up to 330 km achievable on one charge, which is more than adequate for any LCV operation in one day.”

“The new EV vans trio from PSA carry forward the concept of maximum integration between electric and internal combustion engine platforms. Their range is such that they could be attractive through different business as well as last mile delivery.”

A 24 strong judging panel consisting of commercial vehicle editors and expert trade journalists from across Europe and into Russia has elected the winner of IVOTY annually since 1992. The election and voting process is independently adjudicated by the RHA in the UK. 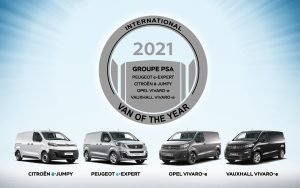