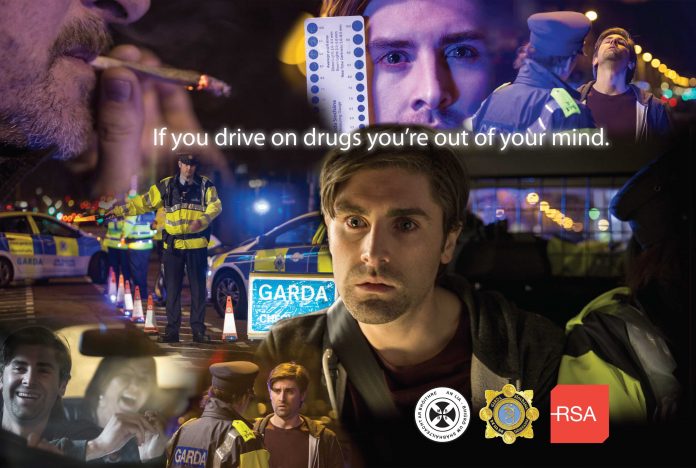 The Road Safety Authority (RSA), An Garda Síochána and the Medical Bureau of Road Safety (MBRS) are highlighting the dangers of drug driving ahead of the Easter Holiday weekend.

It comes as new figures from the MBRS show a 37% rise in the number of blood and urine specimens for drugs testing in 2020 compared to 2019.  Of the 4,435 blood and urine specimens tested for drugs, almost three-quarters (72%) were found to be positive for at least one drug. Cannabis remains the most prevalent drug detected, with 3 in 5 tests returning a positive result for the drug. Analysis also shows increased detection of cocaine use, with between 30% – 40% of specimens provided testing positive for cocaine.

Ms Hildegarde Naughton, Minister of State at the Department of Transport, said: “The significant increase in the number of specimens being analysed by the MBRS certainly reflects the increased levels of detections being made for drug driving by An Garda Síochána. While this is a worrying trend, I believe it is down to a greater focus by the Gardai on this type of dangerous behaviour. This greater focus is very welcome. Drivers need to understand that since the introduction of roadside testing for drugs in 2017, the Gardaí have the tools to tackle this problem. There is simply no hiding drug driving anymore.”

Professor Denis Cusack, Head of the Medical Bureau of Road Safety said: “The high level of enforcement seen last year has continued into 2021. Similar increased numbers of specimens are being received by the Bureau for drugs analysis in the first three months of this year compared to the same time period in 2020. While cannabis continues to be the most prevalent drug detected, the increase in specimens testing positive for cocaine is worrying. Benzodiazepines, which include many prescribable anti-anxiety medications, continue to be a concern too with about 20% of specimens screened last year resulting in a positive test for benzodiazepines.”

Professor Cusack added that, “If taking prescription medication, drivers need to follow the advice of their prescribing doctor and dispensing pharmacist and must be aware of the level of potential impairment, even temporary, that the medication may cause. This is particularly important if the dosage or brand of that medication is altered. If you are in any doubt, speak to your doctor or pharmacist about your concerns.”

Mr Sam Waide, CEO of the RSA, said that: “The figures from the MBRS and An Garda Síochána clearly show that driving under the influence of drugs remains a significant problem in Ireland. Some drug drivers incorrectly believe that certain drugs make them better drivers and imagine themselves at low risk of collision. They also tend to overestimate their driving ability and show little understanding of how drugs affect their driving. Even a small amount of certain drugs can seriously affect a driver’s motor skills, balance and co-ordination, perception, attention, reaction time, and judgment on the roads, putting not only the driver at risk, but also passengers and other road users in danger.”

Mr Waide added, “The Gardai are detecting drug drivers in increasing numbers on the road. If detected and convicted, you will face a driving disqualification of between one to four years. Think about what disqualification would mean for you and ask yourself is it worth the risk?”

Assistant Commissioner Paula Hilman, Roads Policing and Community Engagement, An Garda Síochána added: “An Garda Síochána continues to appeal to the public to reduce social contacts this Easter weekend to further reduce the current impact of Covid 19 on our society. While supporting the response to the Covid pandemic An Garda Síochána remain committed to reducing deaths and serious injury collisions on our roads. If you are driving under the influence of an intoxicant, drugs or alcohol you are more likely to be involved in a collision”.

Despite lockdowns and less traffic on our roads in 2020 detections of drug driving increased with 3988 drug driving arrests in 2020.

Assistant Commissioner Hilman continued: “An Garda Síochána has and will continue to patrol and implement checkpoints across the road network this Easter Bank holiday weekend in support of Government Public Health Regulations. Our priority is to keep people safe, if you decide to drive this weekend under the influence of an intoxicant, alcohol or drugs, you are putting yourself and other road users at risk. Gardaí will be testing for alcohol and drug use this weekend, stay safe, don’t drive under the influence of an intoxicant”.

A total of 6 people have been killed and 53 people seriously injured over the Easter Bank Holiday weekend between 2016-2020*.

It is an offence to drive under the influence of drugs, including prescribed drugs, where your driving is impaired to such an extent that you don’t have proper control of the vehicle. It is also an offence to drive under the influence of certain drugs above specified levels, regardless of driving performance. There are currently three drugs tested for in this category – cannabis, cocaine and heroin. If a driver is found to have any of these drugs above the specified limits, he or she can be prosecuted for drug driving even if driving is not impaired.

If a driver is convicted of drug driving, they face: