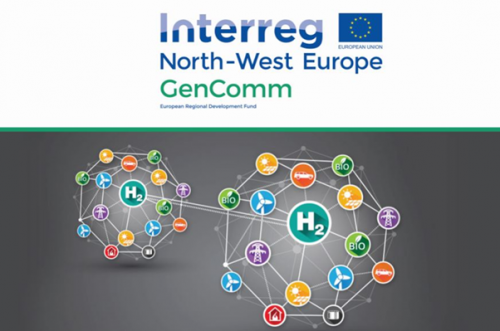 Hydrogen is the catalyst driving Europe’s energy transition. Optimising this journey delivering SMARTH2 through valorisation of the hydrogen supply chain, production, storage and use to meet future need is key to creating a successful hydrogen Europe.

Webinar #4 in the GenComm SMARTH2 series will examine how countries are scaling up and optimising production from additional green energy resources to meet current demand and opening new avenues of generation for utilisation.

Green hydrogen could supply up to 25% of the world’s energy needs by 2050 and become a US$10 trillion addressable market by 2050, (Goldman Sachs) Scaling up green hydrogen production, utilisation and maximising the  Power-to-X (P2X) opportunities – SMART Hydrogen – will be essential to helping global economies to achieve net zero emissions by 2050 and limit global temperature rises to 1.5C.

Nigel Holmes, CEO of the Scottish Hydrogen and Fuel Cell Association www.shfca.org.uk  will speak on ‘Scaling Up H2 Supply and Demand across Scotland’.

Nigel said: “‘Hydrogen is recognised as key to tackling hard to treat emissions, and delivering Net Zero. We now need to rapidly scale up hydrogen supply, demand, and the connecting infrastructure together. The lessons learned with EU funded projects such as GENCOMM, BIG HIT in Orkney, GREEN HYSLAND in Majorca, and HEAVENN in the North Netherlands will help us all to accelerate the safe deployment of hydrogen territories and valleys across Europe.’

The Scottish Hydrogen and Fuel Cell Association (SHFCA) is recognised as one of the most proactive hydrogen & fuel cell industry associations in Europe. SHFCA supports  150 members, with an increasing number from across Europe and overseas who are involved with hydrogen and fuel cell activities in Scotland.

In May 2019 the Scottish Government announced the ambition to become Net Zero by 2045, with an interim target of 75% GHG reduction by 2030. In December 2020 the Scottish Government announced the ambition for 5GW of low carbon hydrogen production to be operational in Scotland by 2030. These targets further reinforce Scotland as one of the leading locations in Europe for the early deployment of hydrogen and fuel cell solutions in low carbon energy systems.

Locations across Scotland including North-East Scotland, Fife, the Western Isles, and the Orkney Islands are leading the way and ‘learning by doing’ with hydrogen and fuel cell deployment. Highlights include the expanding hydrogen bus fleet in Aberdeen, local hydrogen energy solutions such as BIG HIT in Orkney, Acorn in St Fergus, H100 Fife hydrogen for domestic heating trials at Methil, and other emerging projects such as Port of Cromarty Firth for larger scale production of green hydrogen.

Dan McCue, Editor, Renewable Energy magazine in the USA will speak at the webinar on the ‘USA H2 Trajectory’. Dan said: “”With the election of President Joe Biden and his push for a $1.9 trillion overhaul of the United States’ infrastructure, there’s rarely been a more hopeful time for the renewable energy and hydrogen power community. At the same time, however, a bitterly divided Congress and resistance from states that derive large portions of the annual revenue from oil and gas royalties remain hurdles to overcome for the sector’s long term health and prosperity.”

Dan  has been covering the renewable energy industry and climate change-related issues for nearly 15 years. His work on these subjects and others has appeared in numerous publications, including, of course, Renewable Energy magazine, The New York Times, Newsday,  Reuters News Service, the Hartford Courant, The Stuart News, Cleveland Plain Dealer and The Miami Herald. In addition to being content editor for Renewable Energy magazine in the U.S., Dan is content editor for The Well News in Washington, D.C. where he covers and supervises other journalists covering Congress, the White House and the Supreme Court.

Ian Williamson from the  European Hydrogen Association will speak at the webinar on ‘Tidal and Marine H2 Production’.

Ian runs an energy consultancy business based in the UK called ‘Hy Energy’ and acts as a business development director for companies finding their initial business in Europe and the UK. HyEnergy brings sector expertise to bear in various EU funded projects such as SeaFuel and Gencomm and prepares proposals for consortia, such as the first ever Hydrogen valley project funded by the FCH JU – the HEAVENN project. The company expanded its operations to the Netherlands last year.

Ian has over 30 years’ experience in industrial gases, primarily in the hydrogen energy sector having worked for Air Products. He has also been CEO  of one of the few British fuel cell companies, AFC Energy, so he has wide ranging hydrogen supply and application expertise. Ian has been president of the European Hydrogen Association for the last 10 years.

Ian said: “With the push for net zero accelerating we need all the renewable technologies we have available to us. Tidal has lagged behind wind and solar due to technical challenges. However the ITEG project will showcase the progress being made and how it can interface with hydrogen as readily as any other renewable.”

GenComm Programme Manager Paul McCormack will introduce the event. Paul is currently managing several international projects including the GenComm project which seeks to address the barriers preventing the greater integration of renewables into our energy matrix and to navigate a new energy pathway to energy security.GenComm (GENerating energy secure COMMunities); is a Smart Hydrogen (SMARTH2) Integrated renewable energy, generation and storage project designed to develop a new model for exploiting generated electricity from renewable sources to provide energy security for remote communities. The GenComm project will demonstrate how Hydrogen as an energy carrier can be the new energy pathway and overcome the current obstacles blocking greater utilisation of renewable energy in our energy consumption matrix.

Paul said: “The global energy transition is now gathering pace and Hydrogen is a transformational force on our journey to net zero. Through innovative applications, new sector coupling opportunities and pioneering Power– to-X (P2X) technologies it is unlocking our new low carbon energy future. Our 4th webinar in the SMART H2 series will qualify hydrogen demand, use and future production role in our switch from fossil fuels.”

Jarlath
The Chief Executive of the Irish Exporters Association (IEA), CEO Simon McKeever has broadly welcomed the announcement by the UK Government that controls and...

Update on RSA Services affected by move to Level 5 Covid19...