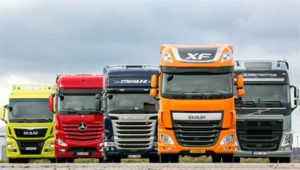 In April 2020, commercial vehicle registrations in the European Union declined by 67.0%, as most of Europe was under lockdown for the entire month. According to ACEA, the representation body for the European automotive industry, the fallout of the COVID-19 pandemic affected all 27 EU markets and every vehicle segment.

In April 2020, commercial vehicle registrations in the European Union declined by 67.0%, as most of Europe was under lockdown for the entire month. The fallout of the COVID-19 pandemic affected all 27 EU markets and every vehicle segment. Spain (-87.8%), Italy (-85.5%) and France (-82.4%) saw the biggest losses in April, as they were also among the countries with the most restrictive containment measures in place.

Four months into the year, EU demand for new commercial vehicles contracted by 34.5%, largely due to the impact of the Coronavirus on March and April results. The region’s four major markets posted double-digit percentage drops so far this year: Spain (-46.6%), France (-41.6%), Italy (-41.4%) and Germany (-22.5%).

April results showed a sharp decline in registrations of light commercial vehicles across the EU. Demand for new vans fell by 69.6% to 46,264 units, or less than a third of the number of vans sold in April 2019. Double-digit declines were recorded in all EU markets last month, including the four major ones. Spain (-91.0%) and Italy (-89.9%) posted the biggest drops in van registrations. Ireland recorded an 87.3% drop in LCV sales.

New heavy commercial vehicles (HCV) of 16t and over

During the fourth month of 2020, new heavy truck registrations fell by 58.5%, marking the tenth consecutive month of decline in the EU. The Central European countries were severely hit (-71.2%) by lockdown measures last month – including Poland (-71.7%), which traditionally is one of the leading markets for this vehicle type in the region. Looking at the major Western European markets, France recorded the biggest contraction (-72.3%) in April.

Last month, demand for new buses and coaches in the EU plummeted by 66.8% to 993 units registered. Except for Hungary, Sweden and Latvia, all markets in the region recorded strong declines in April, and Spain (-81.6%) in particular.

Jarlath
The Chief Executive of the Irish Exporters Association (IEA) has welcomed the publication of the European Commission’s renewed trade strategy which puts sustainability central...

Second Direct Freight Link to Europe begins – from Cork to...