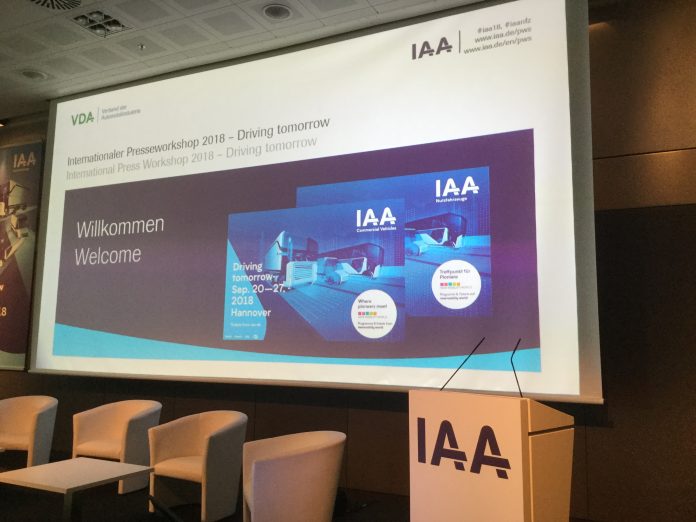 Further connectivity to enhance road safety and efficiency, autonomous driving and alternative powertrains are the main innovations to feature at the 67th IAA Commercial Vehicles Show, which will be held in Hannover from 20-27 September 2018.

Event organizers, the German Association of the Automotive Industry (VDA), held an international press workshop in Frankfurt am Main, attracting high-level representatives of the commercial vehicle industry, and more than 120 international journalists from 27 countries.

Speaking in advance of the world’s most important trade show for transport, logistics and mobility, VDA President Bernhard Mattes said in his welcoming words: “The digitization of traffic opens up completely new opportunities for making mobility smoother and more efficient in large metropolitan areas and beyond. That reduces emissions. Most importantly, digitization, connectivity and automated driving will bring about a quantum jump in road safety.” 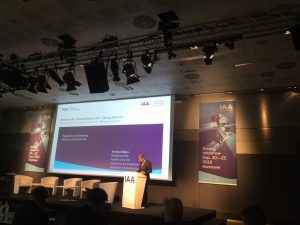 In addition, digitization can contribute to even better connection of the various transport modes within the transport and logistics chains: “This is necessary because we need the interplay of all types of transport in order to cope with the increasing volumes of freight,” Dr. Mattes explained.

The VDA President also drew attention to the advantages of digitization, using platooning as an example: “The Truck Platooning Challenge has proved the technical feasibility of platooning. Now it is being tested in real-life logistics operation. We find that it can reduce fuel consumption and CO2  output by up to ten percent. The next step is now to deploy mixed platoons with trucks from different makers. That will ensure the general applicability of the approach.”

Electricmobility is also a key theme at the IAA CV Show 2018. “There is much potential and opportunities here, particularly for vans and urban buses but also in local distribution using battery-electric vehicles up to 26 tonnes. Manufacturers have invested heavily in this technology and will provide visitors with an insight to experience the latest developments at the event.”

According to Dr. Mattes, considerable progress had been achieved by the commercial vehicles industry and is prepared to make a further contribution in this area. “Yet the manufacturers cannot overcome the challenges on their own. An integrated approach is necessary involving vehicle production, vehicle use, fuels and the infrastructure in equal measure.”

He went on to say that fuel consumption accounts for over a quarter of the total costs of ownership for a long-distance truck. Unlike the market for passenger cars, the market for commercial vehicles is driven solely by efficiency. “Low consumption is therefore an important competitive advantage on the market. So, it is right that the European Commission is endeavoring, in close cooperation with the commercial vehicle industry, to further improve market transparency at this point. The simulation tool VECTO, which delivers “official” comparable values for consumption and CO2output, is an appropriate instrument for this.”

However, the VDA President took a critical view of the European Commission’s proposal for the first CO2Regulation for heavy-duty Commercial Vehicles: “The industry supports a realistic regulation in principle. However, the Commission’s draft is totally out of proportion.” He explained that the European Commission has proposed CO2reduction targets of 15 percent by 2025 and 30 percent by 2030. These targets are roughly double those that the industry considers very ambitious, but still feasible. “Furthermore, the penalties for missing the targets are exorbitantly high and almost arbitrary,” he emphasized.

“We also take a critical view of what the Commission proposed in the second mobility package for the CO2fleet-wide limit values applicable to passenger cars and vans. The projected 30 percent reduction by 2030 is already very ambitious for passenger cars. For vans, this value is just not realistic.”

“First”, he explained, “there are many different types of vans whose construction also varies widely – resulting in differences in consumption. So it is likely to be difficult to implement a standardized CO2value. Second, the potentials for electrification also vary tremendously. And third, new technologies are generally only introduced in light commercial vehicles after they have demonstrated their benefits in passenger cars.”

“The European Parliament and the Council of Ministers are now called on to make adjustments in order to find an approach that will indeed still be ambitious, but which above all must also be realistic and appropriate in practice. Brussels is oversimplifying the issue if it merely transfers the reduction rates for passenger cars to the commercial vehicle sector, which is completely different in nature. The guiding principle for any CO2Regulation must be the basic principle of technology neutrality.”

The continuous upturn in the markets, on the other hand provided welcome news. Sales are up in Western Europe, Russia, China, Brazil and India and demand for trailer/body is buoyant but Dr. Mattes expressed caution: “On the commercial vehicle markets, the outlook for 2018 as a whole is also largely positive, especially given the healthy state of the global economy. No-one is going to overlook the risks here – especially the political risks – and that includes the effects of Brexit. In important regions there is the threat of isolationism and protectionism. So it is all the more imperative that we continue to back free and fair trade and continuation of the negotiations between the large trading nations.”