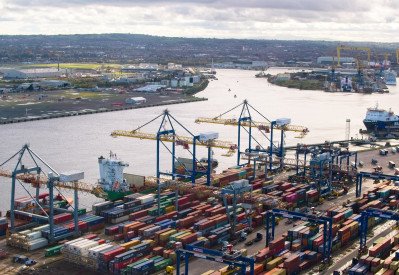 Trade through Belfast Harbour has benefitted from an increase in global trade, the restart of domestic travel and cruise tourism and investment in new infrastructure projects during 2021.

Releasing its annual trade figures, Belfast Harbour has reported a record year, with 25.6m tonnes handled by the Port in 2021, an increase of 9% on the previous year, which had been impacted by Covid-19.

Roll-On Roll-Off freight performed strongly, rising 12% from 2020 to almost 600k freight units, following significant investment in terminals and facilities and demonstrating the importance of Stena Line’s freight traffic routes to Scotland and England to the local economy. Container traffic increased 15% to 132,000 units handled, which was the highest level since 2008.

The overall volume of ferry passengers travelling through the Port increased by 69% year on year to almost 1.5 million people, with routes benefitting from the easing of Covid-19 travel restrictions and the growth in the ‘Staycation’ market.  Stena Line’s Belfast to Liverpool route proved particularly popular as over 400,000 passengers used the service in 2021, up over 150% on 2020 levels.

Overall bulk tonnages handled by Belfast Harbour were up 3% to 9.76m tonnes, with a number of bulk categories posting their strongest year on record.

Belfast Harbour also welcomed 72 cruise ship calls in 2021 as cruise travel partially resumed, compared with one cruise call in the year prior, due to the pandemic.  Cruise call volumes are expected to grow in 2022, as the cruise tourism market continues to recover.

Commenting on the results Michael Robinson, Belfast Harbour’s Port Director, said: “These results record a positive trading picture for Belfast Harbour and demonstrate the resilience of the Port community as it continues to deliver goods and services across Northern Ireland.

“In spite of the challenges faced since the outbreak of the pandemic, Belfast Harbour has benefitted from an increase in global trade and the resumption of domestic travel.

In addition, following the UK’s exit from the European Union, changes in RoRo traffic volumes on routes between Ireland and Great Britain have taken place, with all NI Ports, including Belfast, experiencing improved trade volumes whilst grace periods continue to apply.

Furthermore, our on-going investments in key port infrastructure, aimed at creating a world leading regional Port, have also contributed to the strong trading performance with increased capacity facilitating the strong growth we have witnessed in many sectors of port trade”