Home Breaking News BigLift Vessel sets sail from The Port of Cork with the largest... 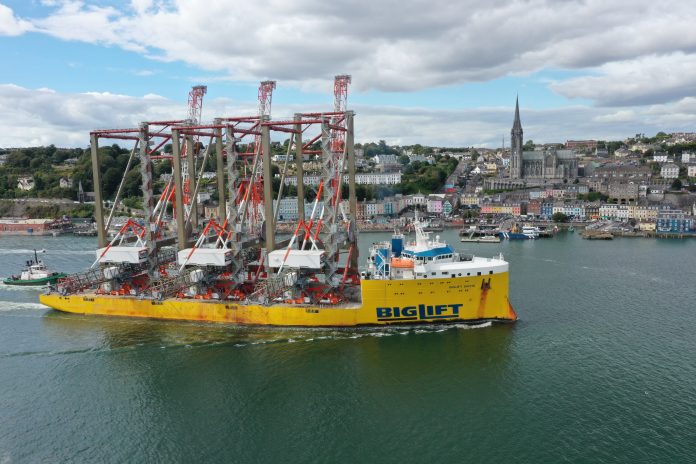 Following months of planning and extensive coordination, three giant ship-to-shore cranes departed The Port of Cork, beginning their journey across the Atlantic, on board the BigLift Baffin vessel.

The three Liebherr cranes, built in Killarney and assembled in Doyle Shipping Group’s (DSG) Cork Dockyard near Cobh, weigh approximately 6,000 tonnes and are the largest ever single objects to be engineered in Ireland.

Conor Mowlds, Chief Commercial Officer at The Port of Cork Company explained further: “It is a very impressive sight, watching these colossal cranes depart from The Port of Cork today and a proud moment for all involved. This operation and collaboration between DSG, Liebherr, and The Port of Cork Company is a tremendous achievement and highlights the potential for further large-scale manufacturing and operations in Cork harbour, as a key player in the global supply chain network.”

Eoin O’Sullivan, Director with DSG added: “We are proud to have played our part in this historic project over the past number of months and are delighted to see a smooth and safe departure from Cork harbour today. A special mention of thanks to all of our partners and team involved in facilitating such a seamless journey from start to finish. We anticipate as smooth a transition on the other side and wish the crew all the best on their journey.”

The voyage across the Atlantic Ocean will take approximately 10 days before reaching the Maher Terminals at the Port of New York and New Jersey in the US. The cranes will then be assembled in their final configuration and will enable the port to offer improved services and faster turnarounds to its customers. Maher Terminals is one of the largest privately held multi-user container terminal operators in the world.