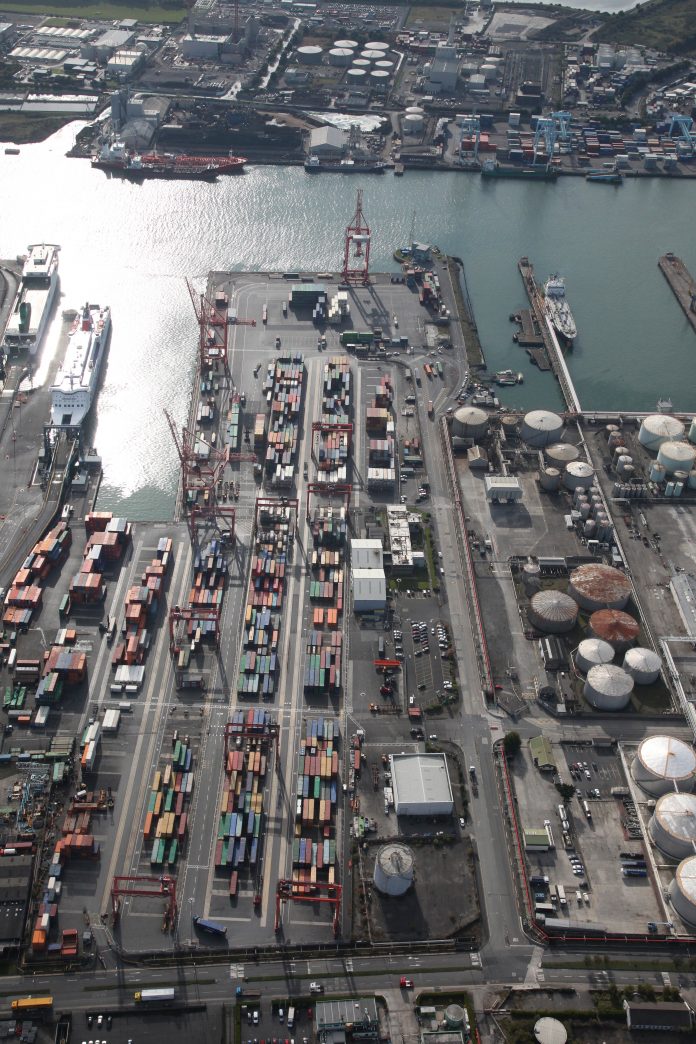 Dublin Port Company has reported trading figures for the first quarter of 2021. Following a strong final quarter in 2020 (when volumes grew by +7.8% in the run-up to Brexit), there was a ‑15.2% decline to 7.8 million gross tonnes in Dublin Port’s volumes for the first three months of 2021 compared to same period in 2020.

While overall Ro-Ro volumes were down by ‑20.1% to 204,000 units, trends were very different on Irish Sea routes to GB compared to direct routes to Continental Europe:

For the 318,000 units of Ro-Ro and Lo-Lo combined, volumes are now split 50 / 50 between ports in GB and ports in Continental Europe and beyond:

Due to continuing reduced transport demand in the economy, Bulk Liquid imports of petroleum products were back by ‑23.4% to 0.9 million tonnes.

Outside of the cargo side of Dublin Port’s business, the pandemic continued to supress passenger and tourism volumes.  Passenger numbers on ferries (including HGV drivers) declined by ‑63.2% to 83,000 while tourist vehicles declined by ‑74.3% to 17,000.

Commenting on the Q1 2021 figures, Dublin Port’s Chief Executive, Eamonn O’Reilly, said: “The first quarter of 2021 was very weak with overall cargo volumes back by 15.2% compared to the first quarter of 2020.  This is mainly because of Brexit.  However, it is too early yet to say what the long-term effects of Brexit will be and whether the declines we have seen so far in 2021 will persist at the same level for the rest of the year.

“With two ferry lines (Irish Ferries and P&O) now operating services both from Dublin Port to GB and across the English Channel from Dover to Calais, we are optimistic that the landbridge will re-establish itself as a fast and cost effective option for the movement of time sensitive goods to and from Continental Europe in the months ahead.

“The dislocation of a lot of volume to ports in Northern Ireland is, however, worrying.  Back in 1990, before the Single European Market was established, more than a third of Ro-Ro trade chose services to and from Northern Irish ports rather than use services in and out of Dublin Port.  We won’t get a proper sense until later in the year as to how much of the 29% decline we have seen in GB Ro-Ro trade is due to the new border regimes and whether this dislocation will be a permanent feature for the years ahead or not.

“The only positive thing we are seeing in the figures for the first quarter is the growth of 18% in Ro-Ro and Lo-Lo volumes on direct services with Continental Europe.  This confirms that the investment decisions we have been taking in recent years under Masterplan 2040 were correct.  It also shows the responsiveness of the shipping market to rapidly provide the capacity needed for the changes in demand patterns which Brexit has caused.

“If we do see a sustained step change downwards in volumes on routes to GB because of Brexit, I expect that the pivoting of trade from GB to Continental Europe will, in time, re-establish the long-term growth trends we have seen in Dublin Port for many decades.”