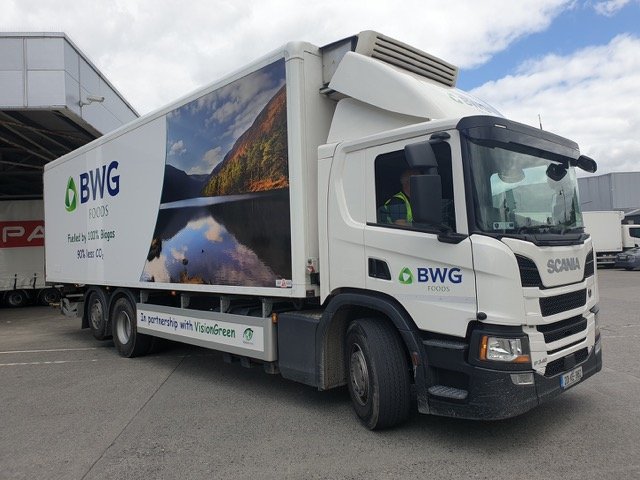 BWG Foods, one of Ireland’s leading wholesale and retail groups, has become the first FMCG group in Ireland to launch a fleet of biogas powered vehicles as part of the implementation of its ambitious sustainability strategy.

BWG Foods, owners and operators of the SPAR, EUROSPAR, Londis, MACE and XL brands, has launched an initial fleet of two trucks fuelled with biogas in place of traditional diesel fuel, with ambitions to further increase the use of biogas as part of their increasingly environmentally-friendly fuel mix. The vehicles will deliver a 90 percent reduction in transport related carbon emissions.

The launch of the Scania P340 6×2, 26 tonne rigid biogas fuelled trucks with Gray & Adams box bodies and electric fridge units, which each cost in the region of €180,000, follows a partnership between BWG and two Irish start-ups – VisionGreen and Generation Green – and represents the most significant development in terms of green transport in Ireland this year.

The trucks are the most efficient transport vehicles across the sector and are also the quietest, meaning less noise pollution across towns and city centres. The first two of BWG Foods’ biogas fuelled trucks will lead to a reduction of 200 tonnes of carbon emissions annually by the business.

In addition to the launch of its fleet, BWG will also contribute food waste from their 240,000 sq ft National Distribution Centre at Kilcarbery to the biogas production site at Nurney, County Kildare, making this a circular solution.

In the last 12 months, the Group has invested heavily in sustainability measures to lower the carbon footprint of its delivery operations and currently has the largest fleet of CNG (compressed natural gas) powered trucks in operation in Ireland, with plans to increase this from 18 to 50 by 2025.

Each of BWG Foods’ CNG trucks complete approximately 120,000 kilometres annually, saving 100 tonnes of CO2emissions in the process, an average of 15 tonnes per truck. As part of its ambitious investment programme, BWG has plans to gradually increase the use of biogas fuel across its entire fleet of CNG trucks as production of the fuel increases.

Biogas, which is produced by the natural breakdown of food and sewage waste, has been designated as one of the Future Fuel of Choice by the Irish Government with greater investment and incentives planned for the increased production of biogas in Ireland. It is also the fuel of choice for BWG Foods into the future given sufficient availability and supports.

Speaking about the launch, Joanne Mellon, Logistics Director BWG Foods, said: “We at BWG are very passionate about finding new solutions that can reduce our environmental impact and given the significant scale of our business, and the expansive supply chain operation that supports it, it is critically important that we invest in new technologies that allow us to pioneer less carbon intensive methods of delivery.”

“We believe that Biogas trucks are the answer to achieve immediate Co2 reductions, as electric and hydrogen HGVs are in their infancy and won’t be available in the Irish market for some time to come. It’s been an exciting process working with two Irish companies, VisionGreen and Generation Green, in the development of a solution that has the potential to transform the logistics industry in a very positive way.”

John Pakenham, Director, Vision Green said: “The aim of our work is to support the business sector to make more sustainable choices and, with greater planning and investment, Ireland has huge potential for developing Renewable Gas. We have partnered with the only existing producer, Green Generation in Nurney, Kildare, to bring this pilot to life, to help demonstrate the benefits of Renewable Gas as a transport fuel.”

As part of its wider supply chain sustainability programme, BWG Foods has also implemented a number of operational efficiency projects that have already led to collective Co2 emission savings of 3,200 metric tonnes per year for the last 4 years. This included a re-routing programme which led to the reduction of more than 2.3 million kilometres travelled annually and an increase of individual delivery vehicle capacity by 15 percent. The business also introduced double deck trailers to reduce the number of journeys being made.

BWG Foods’ award-winning logistics division is amongst the largest in the country with operations in 25 locations with collective distribution space of over 1,000,000 sq ft and 280 vehicles in operation.

The division supplies over 1,000 stores nationwide which together serve over one million people per day, along with a further 14,000 additional professional customers across the retail, foodservice and licensed sectors. The Group has achieved Gold Standard in the FTA TruckSafe programme which audits, reviews and documents fuel efficiencies within the commercial sector, providing data that facilitates a reduction in fuel consumption.