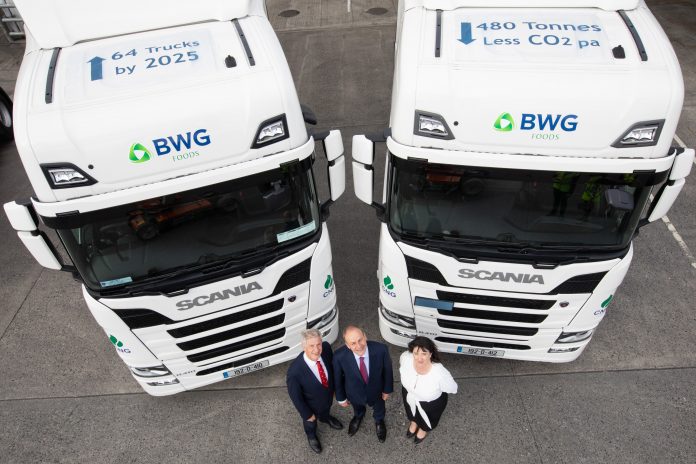 BWG Foods, one of Ireland’s leading wholesalers and retailers, has announced a major €11 million sustainability investment programme aimed at significantly decreasing the environmental footprint of its large-scale nationwide supply chain.

As part of the investment programme, BWG Foods has become the first FMCG group in the country to launch a fleet of CNG (compressed natural gas) vehicles following an initial investment of more than €2 million in 14 new trucks along with supporting infrastructure. The Group, which has partnered with Gas Networks Ireland around the initiative, has plans to extend its investment in CNG vehicles by an additional €6 million for a further 50 vehicles by 2025 as part of its wider supply chain sustainability programme.

BWG Foods operates one of the largest delivery fleets in the country with approximately 280 vehicles, which combined cover over 25 million kilometres per year. The Group’s new vehicles, which use natural gas as the most environmentally friendly fossil fuel, are currently generating C02 savings of up to 22 percent per truck. Each of BWG Foods’ new trucks will complete approximately 120,000 kilometres over the next 12 months, with each truck saving 7.5 tonnes of CO2 emissions in the process. When biogas becomes available for use, BWG Foods projects that CO2 emissions from its new delivery fleet will decrease by approximately 90 percent compared with today’s levels.

As part of its wider supply chain sustainability programme, BWG Foods is also implementing a number of operational efficiency projects that have already led to collective Co2 emission savings of 3,200 metric tonnes, including a re-routing programme which led to the reduction of more than 2.3 million kilometres travelled annually, and the increasing of individual delivery vehicle capacity by 15 percent, further reducing the number of journeys required.

Commenting on the announcement at BWG Foods’ National Distribution Centre, which distributes over 25 million outbound cases per year, Willie O’Byrne, Managing Director, BWG Foods said, “Our focus in BWG Foods is to create an environmentally sustainable business that makes a positive contribution to the communities in which we operate. This announcement marks progress made and is a statement of our intent to substantially reduce the environmental impact of our expansive nationwide supply chain operation. This announcement complements a number of other sustainability initiatives that we have launched at store level including energy, waste and plastic reduction programmes.”

As talks fail to strike a Northern Ireland deal, Customs chaos will only get worse

Jarlath
The failure of a key UK-EU Joint Committee meeting to shelve new fees and red tape on deliveries to Northern Ireland could spell border...