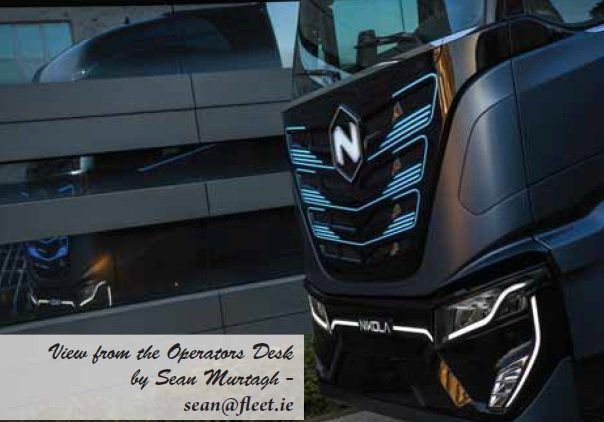 As we enter a new year and a new decade, all the challenges of the past twelve months (and decade even), remain. Economically though, things look a lot more positive than at the start of the last decade. Some significant changes will happen very soon, a new Government for sure and hopefully that will bring a new Minister for Transport who will have some more enthusiasm for the road transport sector. A new appointment at the top within the Road Safety Authority (RSA) is also due as former CEO Moya Murdock moves to a new challenge. It is unfortunate that the relationship between the Irish Road Haulage Association (IRHA) and the RSA soured a little at the end of last year. Improving this relationship is vital for everybody and will only be achieved by dialog and mutual respect, let’s hope that happens. This is also an election year for the IRHA with the selection of a new President. Some new faces are expected here also. So what about the challenges for the industry?

Of course Brexit is still very much on the horizon and it will likely be the end of the decade before we will see the full impact of what it will mean for us as citizens and haulage operators. Hopefully, we will be able to look back and say “what was that all about?” Of course, there are environmental issues, which will have an impact on everything we do, in our personal and professional lives. How much of a change will happen in the area of propulsion? It is unlikely we will have an electric long distance truck, but maybe natural gas will make a big impact, hydrogen even. Will some group of scientists find a synthetic formula to distil a new ‘clean diesel’? Exciting and challenging time ahead.

Back to Brexit, when the new Government is installed, whatever its make up or colour Brexit will be a big part of its work for the coming years. Interestingly, recent communications from both the IRHA and the Freight Transport Association Ireland (FTAI) to their members was again about Brexit. A comprehensive briefing document from the FTAI stated that the big thing that is at stake for the Irish Economy is the ‘just in time’ model. More and more in the past few years many of the successful companies in Ireland needed the seamless nature of a no border Europe. This is now under threat.

The FTAI emphasised that both the UK and Ireland must recognise the unique level of interdependence between Ireland, North and South, in terms of production process and Supply Chain management. The FTAI also said that the need to protect the Landbridge route to and from the larger European market is vital. While many point to the possibility of expanding the capacity on the direct routes to Europe, it is not as practical as it may seem. In a number of recommendations there should be mutual recognition of all documents for transport between Ireland and the UK, fair treatment for Irish transport companies in the UK and existing market access should be maintained. A number of practical problems were highlighted, for example; 30% of international drivers working for Irish companies are European, but not from Ireland or the UK. The document concludes by stating: “it is important that the transition is seamless, giving legal certainty to operators.”