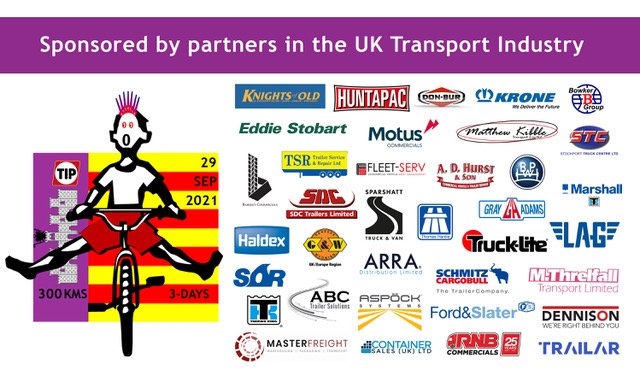 TIP Trailer Services is pleased to announce that its ‘Fat Bottomed Boys & Girls’ (FBB&G) 2021 Balearic Charity Bike Ride has now raised over £70,000 for the two charities nominated, breaking the previous record set by the TIP team on their previous charity bike ride in 2019. Indeed, the FBB&G team has now raised more than £375,000 for deserving charities over the past seven years.

“Bearing in mind the global difficulties of the last 18 months, it has been an unbelievable effort from everybody that participated from the team members themselves, through to TIP work colleagues, and suppliers, as well as friends and families who have supported us throughout this year’s event,” said Mike Furnival, Managing Director UK & Ireland, TIP Trailer Services.

Mike continued: “I must also pay tribute to the support we got from the amazing commercial vehicle industry sponsors who have donated unbelievable sums for those less fortunate than ourselves. The help we received in arranging the logistics, providing cycling gear and so on never ceases to amaze me and on behalf of both charities I fully appreciate the incredible support TIP received from our sponsors this year.”

Over three grueling days in September, the FBB&G team completed a 300 km ride, overcoming a testing route around the Balearic Island of Majorca. This year, the donations have been split between the Donna Louise Children’s Hospice in Stoke-on-Trent, a long term beneficiary charity closely associated with TIP, and the Alzheimer’s Society.