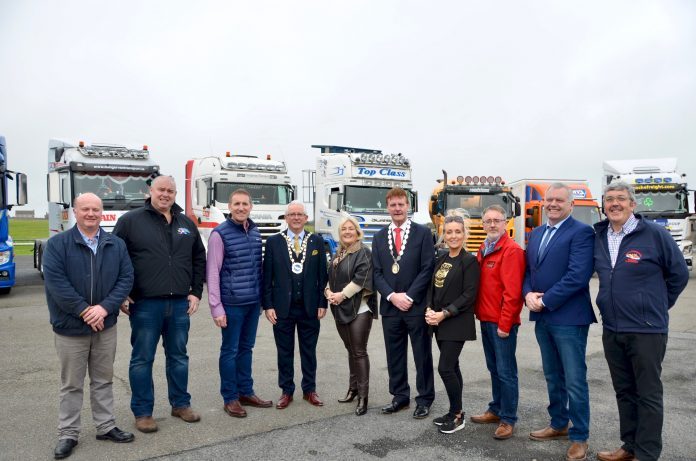 Tramore Racecourse is the new venue for the annual Waterford Truck & Motor Show 2019. Now in it’s 8th year, the event, which takes place over the Public Holiday weekend on the 4th and 5th of May 2019, will attract hundreds of trucks and other vehicles as well as a vast array of trade exhibitors. Another big attraction is the County Music Festival, organized alongside the Truck Show. All proceeds will be donated to designated charity, the RNLI.

After hosting the Show initially in Tramore and subsequently in Waterford city and Kilkenny in the past, Noel Brennan, spokesperson for the Committee expressed delight at being able to bring the Show back to Tramore, stating: “The announcement of the venue at the Racecourse was greeted with great enthusiasm by traders, exhibitors and sponsors and those planning to attend are looking forward to coming, not only to Waterford but to being back in Tramore.”

He thanked main sponsors Circle K, Bridgestone, Dennison Trailers and Fleet Transport magazine for the ongoing commitment to the event and welcomed Volvo Trucks on board as the sponsor of the main stage in celebration of the brand’s 25th Anniversary of its FH Series last year. For the first time at the Show, a Country Music Festival will be held with a top line-up of stars such as Paul Kelly, Seamus Moore, Pamela Gilmartin and the Back Axles, entertaining visitors.

Speaking at the launch Deputy Mayor of Waterford City & County Cllr. John O’Leary said: “It was not only set to be a great Truck Show but the announcement that there will be a fantastic Country Music Festival over the weekend is an added boost to the event especially for the general public and country music lovers from all over the region.” Deputy Mayor Cllr. O’Leary also praised the work being done by the committee and their commitment to making the Show such a success. “There was no doubt it would bring thousands of visitors once more to Waterford City and County.”

Metropolitan Mayor Cllr. Joe Kelly followed this by saying that: “It is a great opportunity for the town of Tramore to welcome visitors from all over Ireland and the UK, and it should add greatly to the local economy over the weekend.” Mayor Cllr. Kelly also thanked the committee for its fundraising eff orts for local charities, and in particular the RNLI which benefits from this year’s event.

Verona Murphy, President of the Irish Road Haulage Association also attended the launch and spoke highly of the event and the ongoing commitment and dedication that the committee and volunteers put in to highlight the merits of the road transport industry and providing those involved the opportunity to meet and network over the course of the weekend.

Further additions to the Show programme will be announced over the coming months. Weekend tickets are now on sale online from the Tramore Racecourse Ticketing Page which is also accessible through the Waterford Truck Show website: www.waterfordtruckshow.com. Admission rates range from €16 for an Adult 2 day weekend ticket or €10 for a single day entry which can be paid on the day. Children are admitted free of charge.