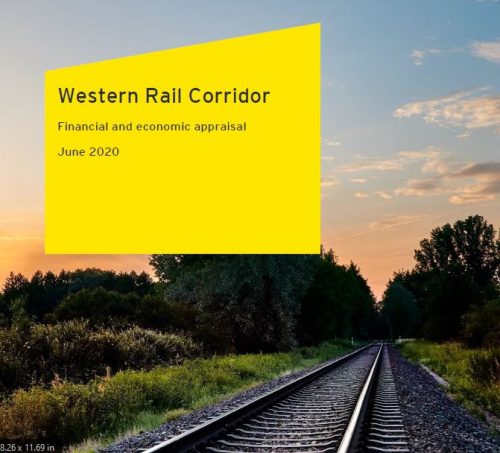 A critical analysis of the recent EY review of the Western Rail Corridor, which was published in January, has revealed hundreds of errors and finds that potential capital costs for the project were more than doubled while many of the terms of reference were either ignored or received only the most cursory treatment. The analysis was carried out by a group of experts with wide experience in rail engineering, economic analysis, regional development strategy, financial analysis, business, and social issues for the rail advocacy group West-on-Track.

A group of experts with wide experience in rail engineering, economic analysis, regional development strategy, financial analysis, business, and social issues has been brought together by the rail advocacy group West-on-Track to conduct a technical evaluation of the recently published Review of the Western Rail Corridor: Financial and Economic Appraisal, prepared by EY, dated 25th June 2020 and published 8th January 2021. (EY Report).

[2] The EY Report Contains an Inordinate Number of Errors

An initial analysis of the report reveals that it contains approximately 324 numerical errors, 31 typographical errors, and 23 errors of fact (shown in this annotated version).  Many of these errors are severe in nature, including leftover calculations in Table 75 which show that the project would deliver €395.9m in cumulative benefits by Year 30 of operation, implying a positive Net Present Value and a Benefit-to-Cost Ratio of >1.0.  The frequency and severity of the errors indicate that the report was not sufficiently reviewed prior to publication, and therefore, its findings and conclusions are not reliable.  Additionally, the tone of the report is markedly unscientific and unprofessional in places, such as at page 100, where the text states, “As an aside, we considered using the [Irish National Transport Model] NTM to produce an alternative forecast to our own, however this was not possible in the time available.”

Both the Scope of Services and a subsequent IÉ annotated consulting brief required that the review be performed in accordance with the Public Spending Code and the Department of Transport, Tourism and Sport (DTTaS) Common Appraisal Framework for Transport Projects and Programmes (CAF); and contain all of the value-for-money tests described therein.

However, EY employs an extremely narrow methodology, drawing conclusions almost entirely from their forecasted capital and operating costs, set against passenger revenues (i.e., the “Exchequer position”).  Little regard (and no analysis) is given to other monetised and non-monetised benefits arising from a wider economic and social perspective, as is required by the CAF.  EY’s costs and benefits assumptions are discussed in items [4] through [8] below.

[4] Treatment of Capital and Operational Costs

The analysis was required to estimate the capital and operating costs of the project.  The expectation was that this would be done in a thorough and transparent manner, documenting data sources, assumptions, and calculations.  Instead, build costs were derived from the preparer’s “own database of costs,” yielding a build cost of €5.0m/km, or 2.8 times (280%) higher than the build cost of Phase 1 on a per-kilometre basis.  Other large operating costs are factored into the analysis with no basis or reference to substantiate them, such as €4.1m per annum for ongoing infrastructure costs and €3m per annum in reduced road tax and fuel duties being paid.  These largely unsubstantiated costs dominate the overall cost/benefit analysis.  They require careful scrutiny, given the level of errors described under [2].

The analysis was required to include freight forecasts based on existing demand, empirical studies, and other international projects, followed by robust estimates of the costs and benefits.  Instead of providing that analysis, the consultant states at page 44, “Consideration of the wider benefits to carrying greater freight on the rail network, and the associated costs and challenges, are outside of the scope of this appraisal…”.  The three-sentence financial assessment of freight in Section 6.2.2 concludes that €5,400 of per-train revenue, operating five days per week, will be offset by “ongoing costs such as drivers, fuel and fleet,” resulting in a net benefit of exactly zero.  No analysis of benefits is undertaken regarding the WRC’s potential to rail-connect and serve Shannon Foynes Port.

The analysis was also required to quantify a host of wider benefits, such as:  diverting freight from Dublin port, tourism and rail tourism benefits of a “Wild Atlantic Railway,” traffic congestion mitigation, an all-island post-Brexit infrastructure, and the WRC becoming a driver of the Atlantic Economic Corridor (AEC).  Here, the IÉ consulting brief required a very detailed examination of the WRC restoration in the context of official regional development strategy, with special attention to the AEC.  There is no actual work reported by EY on how the AEC and the WRC could interact to drive growth and development along the west coast.[1] 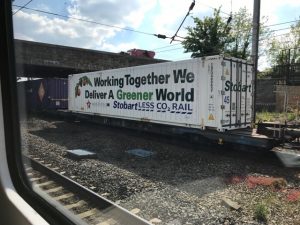 The analysis was required to quantify the air quality and GHG benefits and cost savings of an “environmentally friendly rail transport option,” including the potential electrification of the railway in the future.  This is nowhere included in the report, which ultimately concludes that reactivating the WRC will result in a near-zero change in emissions (in fact, a small disbenefit equalling -€0.02m per annum).  This seriously underestimates the benefits of rail restoration, and in particular fails to quantify the emission reductions from removing 18 lorries per day (round trip) operating between the West and Southern Ports.  Negative GHG emission benefits fly in the face of reason for railway expansion projects, especially when potential electrification is evaluated.

The analysis under this heading was extremely superficial and did not engage seriously with the issues as set out in the CAF or in the IÉ consulting brief.  The “agglomeration benefits” were treated by simply reproducing material from the consultant’s brief, which in turn was taken from the CAF document. Such agglomeration benefits, as described, are more relevant to high density urban areas and fail to capture the kinds of actual agglomeration benefits that would come about by linking the kinds of isolated smaller towns in the WRC catchment area that are poorly served with intercommunication infrastructure.  Likewise, the analysis gives little regard to the non-monetised benefits that the WRC would provide to the disabled, elderly, and students.  Section 7.4 of the CAF requires that monetised and non-monetised benefits be included on a Project Appraisal Balance Sheet (PABS).  No PABS was prepared for this appraisal, and none of the other templates included in Section 7 of the CAF were utilised whatsoever.

The analysis required EY to create a bespoke demand model to estimate commuter choices between car, bus/coach, and rail travel modes.  The type of modelling performed[2] requires “calibration” against observed data before future commuter choices can be accurately forecasted.  As indicated on page 103 of the report, this was not done: “We did not attempt to calibrate the rail versus bus/coach nest, and there was insufficientdata available on the current mode shares.”  A similar key calibration for Tuam (the largest new settlement area to be served by the WRC) is absent from Table 28.  These omissions are likely causing the model to yield pathological forecasts.  Furthermore, the model is based on outdated 2012 travel patterns reflecting near-peak unemployment at the height of the recession.

Long-term growth in rail passengers is assumed to be relatively static at an annual growth rate of about 0.6%, which is not indicative of the growth rate seen for Phase 1. This assumption is at odds with regional development strategy for the next 20 years, geared towards population growth and consolidation of towns such as Athenry, Tuam, Claremorris, Castlebar, Westport, Ballina, and others.

Furthermore, the EY report displays a disturbing lack of knowledge about the structure of the Mayo and East Galway economies, with high population growth in the relatively small towns that have poor infrastructure links. In effect, the EY revenue projection methodology appears to be based on the experience of very large urban centres and areas of high population density, with many examples taken from the UK.  It is then applied, inappropriately, to the very different demographic and socio-economic situation pertaining in the West of Ireland.

The Scope of Services referred to in [3] above states: “On completion of the appraisal the findings and recommendations will be subject to peer review.”  Here we note that EY Report was screened by the Joint Assistance to Support Projects in European Regions (JASPERS), but that that screening did not constitute a technical peer review.  Rather, JASPERS’ Project Screening Note states, “[O]ur note is not a critique of the EY report, but is instead a broad assessment of the maturity and feasibility of the project based on material that has been published to date.”  In that sense, JASPERS has only commented on the findings of the EY Report taken at face value and has not attempted to verify the accuracy and robustness of the methodology and results. Indeed, such verification would not be possible, given the limited data that the report contains.  To enable a thorough peer review, our working group has formally requested the underlying data and analyses on which the EY Report is based and is awaiting a reply from DTTaS.

Various concerned groups in the West of Ireland have struggled over the years to bring a sense of realism and optimism to the WRC as a crucial infrastructural backbone to the revival of the central and northern AEC.  Their efforts are evidenced by the public consultation process described in the EY Report, which reveals at page 5 that “the overwhelming majority (73%) of those surveyed felt that the focus of investment should be on rail.”  This is compared to the 10% of responses indicating that the permanent way should be used for “cycling infrastructure.”

This goal of this working group is to promote a fundamental economic and social “rethink” of the West, broadly in line with the Regional Spatial and Economic Strategy (RSES) authored by the Northern & Western Regional Assembly. We strive to break from the East-West development distortion that has complicated political debate in Ireland, relegating the West to a form of second-class development status.

The errors and omissions in the EY analysis noted herein are of an extremely serious nature, and if left unchallenged, will risk depriving the West of significant monetised and non-monetised benefits of a potentially transformative magnitude.  It is therefore the intent of our working group to prepare a thorough, broad, yet concise alternative appraisal that will likely yield an entirely opposing conclusion.

[1] The EY report did not examine the AEC context in other than very superficial terms. The AEC is mentioned four times in the body of the EY Report. Two of these references are simply reiterations of material taken from the IÉ consulting brief. The other two are vague references to the AEC initiative.

[1] Referred to as a “Nested Multinominal Logit Model.”