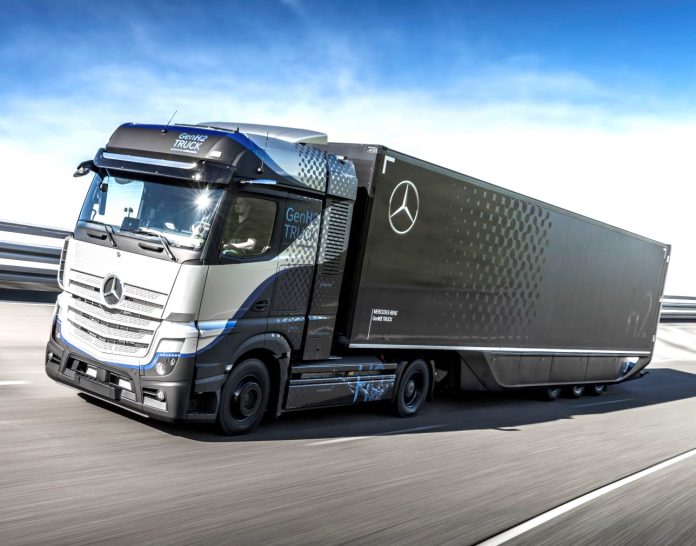 With the commencement of an extensive and rigorous testing programme involving its prototype GenH2 truck, Daimler Trucks has reached the next milestone on its path to the series production of hydrogen-powered fuel-cells for the electrification of its long-haul transport vehicles.

Unveiled last year, the GenH2 Truck is designed to meet the same durability requirements as a comparable conventional Mercedes-Benz Actros, the aim being to achieve ranges of up to 1,000 kilometres and more without stopping for refuelling. This equates to handling 1.2 million kilometres on the road over a period of ten years and a total 25,000 hours of operation.

During testing, the vehicle and its components will be put through its paces on continuous operation, different weather and road conditions and various driving manoeuvres, amongst others. Testing will see the vehicle cover hundreds of kilometres under continuous load and undergo many extreme situations, based on real-life operating conditions, such as emergency braking and kerbstone drives along the test track.

Newly designed from the ground up, the GenH2 truck features completely new components – the fuel-cell system, all-electric powertrain and associated systems such as a special cooling unit. Preferring to use liquid hydrogen as the energy carrier – with its higher energy density in relation to volume than gaseous hydrogen – fuel-cell tanks on truck using liquid hydrogen are much smaller and, due to lower pressure, significantly lighter.

Coupled with giving the trucks more cargo space and a higher payload, more hydrogen can be carried, which significantly increases the trucks’ range. Like conventional diesel trucks, the series GenH2 truck will be suitable for multi-day, difficult-to-plan long-haul transport, where the daily energy throughput is high.

In addition, because the weight and position of new components affect its handling properties differently than those in conventional vehicles, the current prototype will be loaded during tests with a payload of up to 25 tons for a gross vehicle weight of about 40 tons, identical to the specifications planned for the series-produced variant.

According to Daimler Trucks’ development plan, it is expected to undergo tests on public roads before the end of the year with customer trials scheduled to begin in 2023. It is expected that the first series-produced GenH2 trucks will be delivered to customers in 2027.