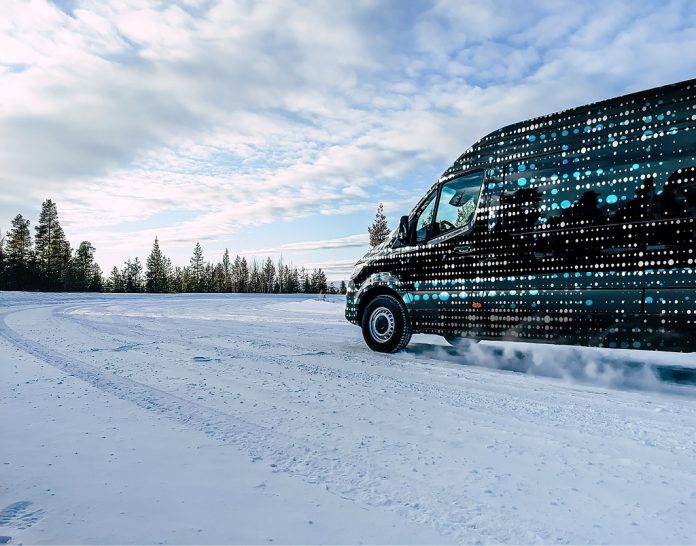 Arjeplog, Sweden. Customers place the same demands on battery-electric vans as they do on equivalent vehicles with combustion engines. And right at the top of the list is complete reliability even in the most difficult weather conditions. This is because commercial customers depend on their vans not letting them down – even in ice and snow.

That is why Mercedes-Benz Vans tests all of its electric vans in extreme climatic conditions such as on snowy and icy roadways, in cutting winds and at temperatures up to minus 30 degrees. These are real endurance tests both for the vehicle and the team of developers.

At the challenging testing grounds at Sweden’s Arjeplog, close to the Arctic Circle, vehicles undergo a variety of tests in which the effects of extreme cold on handling, ergonomics, thermal management and cabin comfort are examined. The low-temperature resistance of drive components, heating systems, software and interfaces are tested in specifically built cold chambers, where the vehicles are cooled down before the test drives. Also the charging behaviour and charging management are examined and optimised precisely.

After only half of several weeks of planned tests it became clear that the next generation eSprinter defies both ice and snow, extreme temperatures and can cope with the most difficult test cycles.

The next generation eSprinter

What is required of the next generation eSprinter was defined in close co-operation with customers, e.g. from the CEP sector (courier, express and parcel services) and bodybuilders.

With its three battery versions and numerous body variants – from the panel van to the chassis for box bodies, the next generation eSprinter will not only open up new customer segments, but new markets such as the U.S. and Canada, for example. In comparison with the current eSprinter, the range will be more than double depending on the configuration.

Mercedes-Benz Vans is convinced of the ecological and economic advantages of battery-electric vans, has firmly anchored its leadership aspiration for electromobility in its strategy and is systematically electrifying all models. Body manufacturers and customers can already choose from four battery-electric driven vans: the eSprinter, the eVito Panel Van as well as the eVito Tourer and the EQV. Furthermore, the new eCitan, the electric small van for commercial operations and the electric variant of the T-Class, the small van for families and leisure enthusiasts will expand the locally emission-free product portfolio of Mercedes‑Benz Vans.

With the next generation eSprinter, Mercedes‑Benz Vans is continuing to consistently implement its strategy and underscore its leadership aspiration to be the “Lead in Electric Drive”.

And course has been set towards a fully electric future. By the end of the decade the brand with the three-pointed star will be ready to be fully electric – wherever market conditions allow. This means that from 2025 all new vehicle architectures will be exclusively electric. And in line with this, Mercedes-Benz Vans will also develop a new, purely electric vehicle architecture for the third generation of eVans. Its name is VAN.EA and the first vans based on VAN.EA will be launched on the market from the mid-2020s.