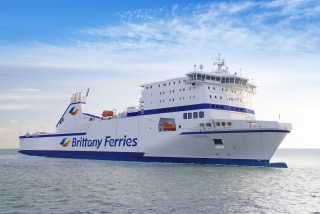 Brittany Ferries has announced a new weekly freight service linking Le Havre in Normandy with Rosslare in Ireland. The route will be served by Cotentin, Brittany Ferries’ freight-only vessel and will commence on Friday 12th November 2021.

The move follows a significant increase in demand for direct freight links connecting Ireland with France. Since the beginning of September Brittany Ferries has reported a 76 per cent increase in weekly freight carried, compared with the first eight months of the year.

“Thanks to flexibility in our fleet and agility in our operations, we have been able to move quickly to meet growing demand,” said Christophe Mathieu, Brittany Ferries chief executive officer. “Brexit has delivered more headaches than opportunities, particularly on routes serving the UK and France. However, the so-called Brexit by-pass, where freight operations avoid the UK completely, is one area that has worked to our advantage.”

Cotentin re-joined the Brittany Ferries fleet in January 2021. Built in 2007, she is 165 metres long with space for 120 freight units. She features 120 cabins and a range of amenities for drivers including a restaurant, bar and shop.

This new line will complement the Cherbourg – Rosslare maritime route, operated by Brittany Ferries with Connemara since the beginning of 2020.

Jean-Marc Roué, Brittany Ferries’ president comments, “The red, white and blue of the French Tricolore must be flown on the routes to Ireland from Brittany and Normandy. And who better than Brittany Ferries, the largest employer of French seafarers, to display them proudly? This new route between Le Havre and Rosslare is an important step. The biggest French port should have its own freight link to Ireland.

“Economically, it’s obvious. In almost a year, the number of freight vehicles transported by sea from Ireland has tripled. I have no doubt that the imposition of control measures on the UK-Ireland landbridge at the beginning of 2022 will further strengthen this appetite for the sea alternative, and that this Le Havre/Rosslare route has a bright future.

“But it is also strategically essential for our Company: we must be present wherever there’s a real potential for growth as part of our return to competitivity. Our experience sailing to Ireland, both from Cherbourg and from Brittany, is compelling enough for us to embark on this adventure, creating a new route between our two countries.”

Surging demand on services linking Ireland with France, mirrors a sharp rise in freight carried between Ireland and Spain.

The company is regularly carrying more than 1,000 freight units a month on its seaborne route connecting Rosslare with Bilbao. In the first eight months of the year, demand rose 70 percent compared with 2020 figures.

Ferry lanes linking Ireland with Spain were opened for the first time by Brittany Ferries in 2018. The Rosslare-Bilbao route has since become an important artery for hauliers and logistics operators.

The Rosslare Bilbao service operates twice weekly in each direction, with sailings from Rosslare on Wednesdays and Fridays, and from Bilbao on Thursdays and Sunday.

In 1967 a farmer from Finistère in Brittany, Alexis Gourvennec, succeeded in bringing together a variety of organisations from the region to embark on an ambitious project: the aim was to open up the region, to improve its infrastructure and to enrich its people by turning to traditional partners such as Ireland and the UK.

In 1972 BAI (Brittany-England-Ireland) was born. The first cross-Channel link was inaugurated in January 1973, when a converted Israeli tank-carrier called Kerisnel left the port of Roscoff for Plymouth carrying trucks loaded with Breton vegetables such as cauliflowers and artichokes. The story therefore begins on 2 January 1973, 24 hours after Great Britain’s entry into the Common Market (EEC). From these humble beginnings however Brittany Ferries as the company was re-named quickly opened up to passenger transport, then became a tour operator.

Today, Brittany Ferries has established itself as a national leader in French maritime transport: an atypical leader, under private ownership, still owned by a Breton agricultural cooperative. Eighty five percent of the company’s passengers are British.

The road ahead for utilities in the future of e-mobility