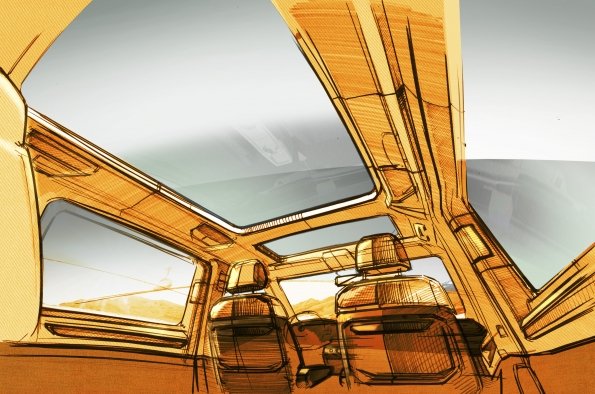 The Volkswagen Multivan is the master of transformation: family MPV, business shuttle, sports gear transporter, removal van, camper with sleeping space, a vehicle for everything. The first-generation Multivan launched in 1985 already scored with this concept. It is the model line’s DNA. With each new Multivan the flexibility of the interior has been further perfected. Volkswagen Commercial Vehicles is now presenting this year the next stage in the cult vehicle’s evolution: the new Multivan. It will have the most flexible interior system that a VW van has ever had.

Nothing remains as it was. And yet everything feels the way that it must in a Multivan: High seating position in the front. Up to five movable/removable individual seats in the back. On request, the second row of seats can be rotated by 180 degrees, allowing the rear seats to be arranged in the typical face-to-face arrangement of the Multivan. It is a concept that originates from the Multivan T3 and has been a winning formula for over 35 years. Generation by generation it has become even better. The time is now ripe for another big step: in taking it, the new Multivan will transport the unique interior concept of the T3, T4, T5, T6 and T6.1 into the future.

Albert Kirzinger, Head of Design at Volkswagen Commercial Vehicles, explains in a short video why flexible seats and a middle seat that is both movable and removable are so important for a Multivan: “It is wonderfully practical. And a car is practical, if it can be used flexibly. To that end, we’ve created a new seating system. You can easily take seats out to get your sports equipment, mountain bike and/or surfboard into this generously proportioned space. With these seats, everything is possible in the new Multivan.”

Henceforth there will be only individual seats – the full-width bench seat on the third row has been done away with. At the same time, the new individual seats of the second and third rows have become much lighter.

They can now be moved extremely quickly and also taken out and put back in with the utmost ease. That’s because Volkswagen Commercial Vehicles has redeveloped the track system as well. It is now an end-to-end system from the back through to the second seating row. That makes arrangement of the seats more flexible than ever. Since the three-seater rear bench has given way to individual seats, it will be possible in future, for example, to simply remove the seats on one side of the vehicle or to seamlessly push the middle seat of the third row forward to just shy of the first seating row for transporting expensive racing bikes or e-bikes. Since 1985, every Multivan has incidentally also had a table on board. It too has been reinvented by Volkswagen Commercial Vehicles. It is now more functional than ever and can – thanks to the new track system – be docked in any position. But that is already moving on to another story about the new Multivan. To be continued!