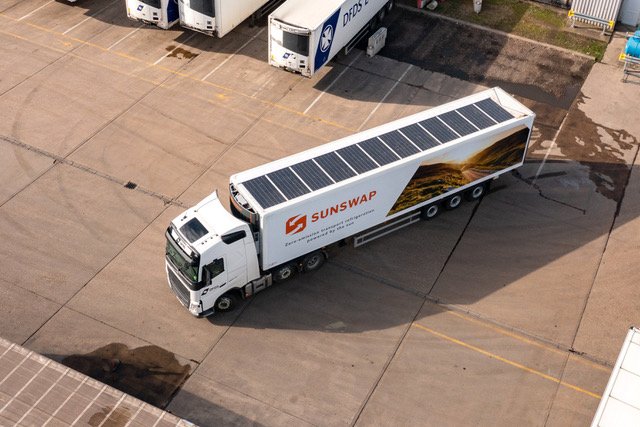 In the trial, operating within the DFDS fleet, the Sunswap TRU utilised a combination of solar and battery power to ensure that frozen produce was successfully transported across the UK. On one of DFDS’s longest routes, the TRU provided 22 hours of frozen cooling time on a single charge over the course of two days. Depending on conditions, the solar panels can typically provide 65 to 100 percent of the charge needed to operate the refrigeration unit, which considerably reduces reliance on grid charging and costs. During the deployment the average time to fully charge the TRU was 80 minutes.

The successful partnership has demonstrated that an environmentally friendly and operationally capable alternative to diesel is possible. Based on findings from the deployment, it was established that a ten-year period of Sunswap TRU usage would amount to a 25 to 35 percent average cost of ownership saving in comparison to operating a diesel TRU.

Commenting on the investment Matt O’Dell, UK MD of Cold Chain at DFDS Logistics Services Ltd, said: “Finding innovative solutions to reduce emissions while improving our customer offering is a top priority for our cold chain service and DFDS as a whole. That said, we’re very excited about the potential of Sunswap who offer the only purpose built fully electric transport refrigerated unit on the market. Earlier this year we trialled a unit in our UK operation. We are thrilled with the results of the trial and excited to integrate Sunswap zero-emission TRUs into our fleet, which should enter our service within the next year. This is a significant step in building our capability to achieve climate neutrality. DFDS is pioneering new green technologies throughout its operations, in line with a commitment to reduce emissions by 45 percent by 2030 and to ultimately achieve climate neutrality as an organisation.”

Michael Lowe, Sunswap’s CEO, added: “Seeing Sunswap’s TRU integrate seamlessly in DFDS’s fleet earlier this year was a monumental moment for us and today’s news confirms that we have an exciting road ahead. Sunswap was founded as, despite the willingness of businesses operating in the cold chain, there has previously been a lack of viable transport refrigeration alternatives to diesel. Transport refrigeration is seen as a significant barrier to the UK Government’s target to bring all greenhouse gas emissions to net zero by 2050. It has been fantastic to work with the team at DFDS who are passionate about removing emissions from the cold chain and willing to support their vision with action. As the industry continues to step-up, we will work as fast as we can to meet the demand for our tried and tested, cost-effective, sustainable transport refrigeration solution.”