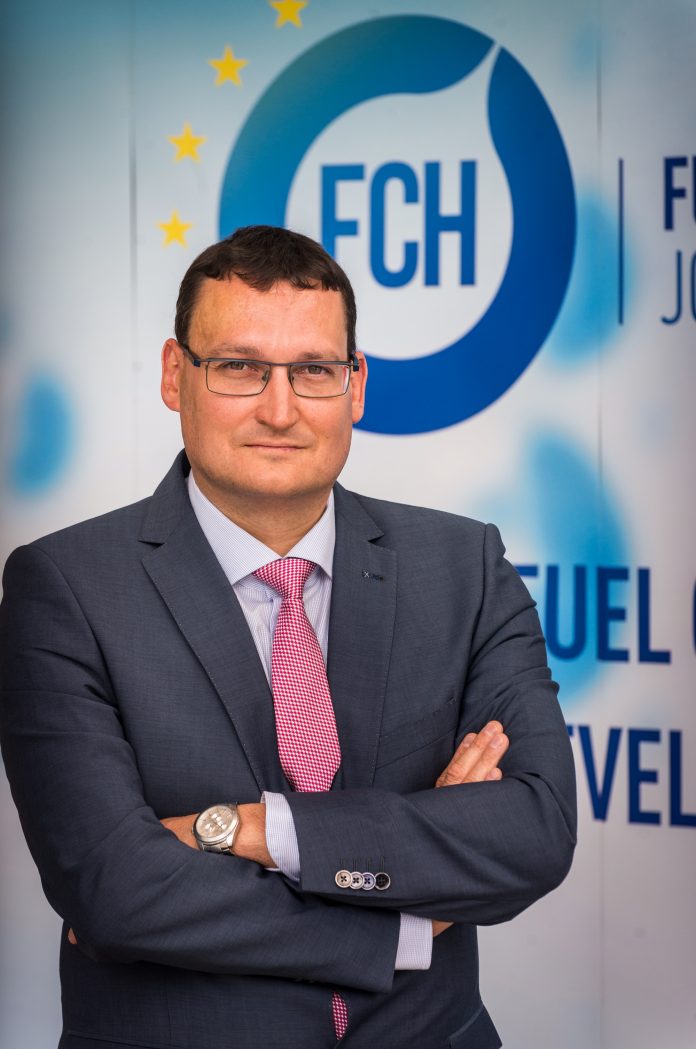 The final webinar in the GenComm Spring series

Bart Biebuyck, the Executive Director of the Fuel Cells and Hydrogen Joint Undertaking, (FCHJU) since 2016 will speak on ‘H2 in Energy Systems 2025 +’.

The FCHJU is a public private partnership aimed at facilitating the deployment of fuel cells and hydrogen technologies in Europe.

Under Barts leadership there has been a strong emphasis on cooperation with cities and regions leading to the creation of the ‘European Hydrogen Valleys Partnership’ with around 40 regions. Dissemination of project results, building technology awareness and enhanced basic research became Barts key focus points.

Before the FCH JU, Bart was at the Fuel Cell Department of  ‘Toyota Motor Europe’ where he held the position of Technical Senior Manager. It is as part of the Clean Energy Partnership, (CEP) Program in Berlin that Bart worked at reinforcing European trials for the Toyota Fuel Cell vehicle. He also had the opportunity to develop and expand his expertise in Japan where for two years he worked on the development of Toyota and PSA’s small vehicle. Barts term as Executive Director of the FCH JU has been extended for four years until 15 May, 2023.

Also speaking at the May 27 webinar is Jan Hildebrand, the Head of Department Environmental Psychology at IZES gGmbH since 2016. Jan will speak on the topic of ‘Enhancing Stakeholder Engagement’. Before his current role Jan had been the Team Leader of the Environmental Psychology Research Group at the University of Saarland. His research interests include the acceptance of renewable energies and related energy infrastructures, conflicts and stakeholder perspectives in the energy sector as well as public participation processes and their psychological dimensions. Jan is co-ordinating the public acceptance of P2X Technologies within the flagship project Kopernikus P2X.

A third speaker at the May 27 webinar is Anne Toner from the Hydrogen Ireland group which was formed in 2019. Anne will speak on the topic of ‘Empowering H2 Integration’.

A prolific networking professional, Anne has been involved in a number of international projects including Biogas solutions, DSU Applications, Energy Storage, WTE Projects at domestic and industrial level and several other projects in the Crypto Currency and Energy Management field.  Anne’s role as Project Manager in H2Irl will be to help grow the network, identifying synergies between Key industry stakeholders (members), build international links and develop a pipeline of large scale demonstrator projects that support the adaption of Hydrogen as a key fuel source on the energy highway to net zero by 2050.

GenComm Programme Manager Paul McCormack will introduce the event. Paul is currently managing several international projects including the GenComm project which seeks to address the barriers preventing the greater integration of renewables into our energy matrix and to navigate a new energy pathway to energy security. GenComm (GENerating energy secure COMMunities); is a Smart Hydrogen (SMARTH2) Integrated renewable energy, generation and storage project designed to develop a new model for exploiting generated electricity from renewable sources to provide energy security for remote communities. The GenComm project will demonstrate how Hydrogen as an energy carrier can be the new energy pathway and overcome the current obstacles blocking greater utilisation of renewable energy in our energy consumption matrix.

Paul said: “The energy sector is one of the leading sectors that must respond to the global climate challenge. On the 18th May the International Energy Agency announced their net zero by 2050 roadmap. This roadmap is a viable pathway to building a global energy sector with net-zero greenhouse gas emissions in 2050. However it is a narrow route that needs widened by technology adaption and more importantly it needs populated, stakeholder engagement is the key to the roadmap success, it requires immediate action from stakeholders across all countries to deliver a SMART H2 Highway – a transformation of our energy spectrum where all participate and secure a just transition to net zero. ‘