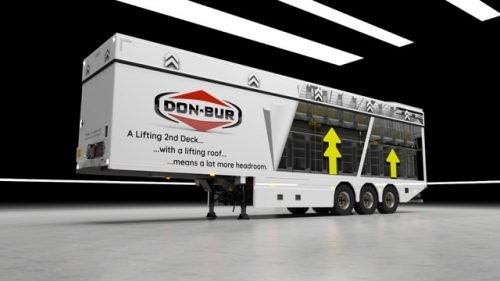 For the first time, Don-Bur has manufactured a Lifting Deck tri-axle trailer design with an expanding roof. Designed and built for a well-known parcel company, the new semi-trailer provides 7.8% more head room on the lower deck during loading but keeps overall height to 4.5m when in transit to avoid low bridge restrictions and retain a more idealistic aerodynamic profile. Combined it is expected to result in a 5% fuel saving.

Lifting Deck trailers were invented by Don-Bur in the late 1980’s and continue to rise in popularity due to high payload volume and rapid turnaround at the bay without additional specialist bay equipment. The simple premise is a secondary deck that, when loaded in its lowered position to suit bay height, then raises via hydraulics to a second height allowing another full payload to be loaded underneath it. However, straight-frame Lifting Decks in particular have their aperture heights limited between the height of the fifth wheel and overall height and this restriction can cause challenges with head height for loading operatives. The new expanding roof overcomes this by allowing the loaded second deck to raise much higher than normal during lower deck loading. After loading and before transit, the roof and deck lower again to a position where gaps over the load are minimal.

Aerodynamically, the force of drag is directly proportional to the frontal area of the trailer. Therefore, the ability to keep the roof 350mm lower than a full height double deck reduces drag force by an estimated 661 Newtons*. This 15.5% reduction in drag is expected to realise a 5% fuel saving; being approximately one third** of the drag reduction figure.

One of the most ingenious parts of the design is the roof attachment system. During part of the loading operation, the scond deck has to move up and down freely and independently of the roof; However, as the deck over-extends upwards to generate more head height, so too does the roof to prevent the upper load being crushed. Not only that, but the roof then has to forcibly clamp back down onto the body structure, to ensure the correct lower height and prevent water ingress. Don-Bur has developed an innovative solution to this challenge and, for this reason, has applied for patent.

The new trailer design won’t suit every operator with high, indivisible payloads (where a step-frame design may be more applicable) but will be particularly useful for businesses that operate with lower cage heights/pallets or loose loads. It could also be applied to companies that switch between operation in Northern Ireland (that has a 4650mm overall height restriction) and the UK mainland; the latter having a 250mm potential height benefit equivalent to an 8.6m3 volume increase. 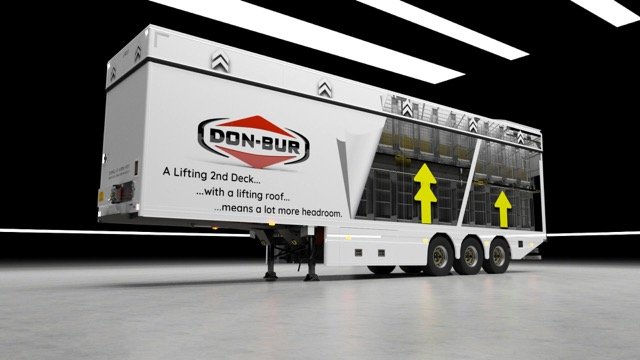 David Burton, Chairman at Don-Bur commented on the achievement: “This development was in response to a customer need as many of our innovations are. We were very proud to deliver a unique, simple and robust mechanism that gives the client greater flexibility, improved safety, enhanced aerodynamics and optimum value.”

* @56mph. Comparison made between base trailer at 4850mm high and test trailer at 4500mm high assuming all other proportions are the same. Coefficient of drag is calculated to reduce due to improved drag profile.
** Case studies studying multiple fuel trials relative to drag force have indicated that drag force represents approximately 33% of all other resistant forces including surface friction, tyre deformation and drive line resistance.