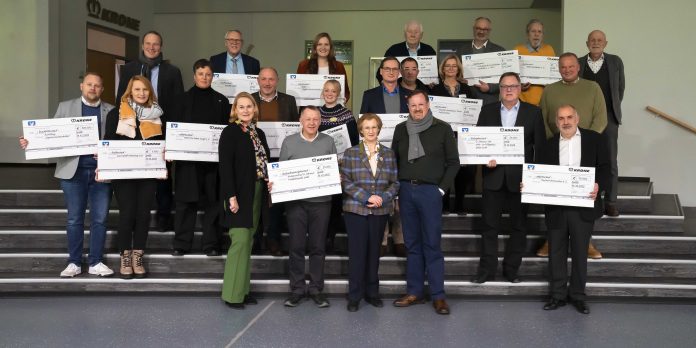 The appeal for donations in commemoration of  family entrepreneur Dr.-Ing. E.h. Bernard Krone raised a record sum of nearly €250,000. As requested by the deceased, these incredibly generous sums from donors all over the world were handed over today to charity organisations and projects that were particularly close to the heart of the deceased. On behalf of the entire family, Dorothee Renzelmann and Bernard Krone presented the cheques to visibly delighted representatives of the beneficiaries at the Spelle headquarters.

The beneficiaries were regional institutions and supra-regional initiatives: regional associations and organisations, the St. Johannes-Stift nursing home, the parish council of St. Johannes Spelle, the boards of the food banks at Haselünne, Spelle and Werlte, the Spelle WIR-FONDS fund, the Emsland Moor Museum, the Emsland Rural People Association, the social initiative ‘Land schafft Verbindung’ and the palliative care unit of the Elisabeth Hospital in Thuine. All beneficiaries expressed their heartfelt thanks for these endowments as the year comes to a close. Dr Bernard Krone was also a keen supporter of projects and initiatives in the farming machinery and commercial vehicle sectors. The association ‘Acker e.V.’ and its ‘Vegies Academy’, the ‘Kinder-Unfallhilfe’ relief programme for kids who suffered an accident, the ‘DocStop for Europeans’ and ‘PROFI Pro Driver Image’ programmes gratefully received the financial support.

“As the Krone Group attaches greatest importance to the training and education of young people, we will further donate nearly €100,000 to Colleges and Universities of Applied Sciences and their engineering faculties in order to continue attracting highly qualified junior staff to the Emsland region”, says Bernard Krone, Chairman of the Supervisory Board of the Krone Group.

Caption: The grateful beneficiaries are welcomed by Dorothee Renzelmann and Bernard Krone at the Krone Customer Center in Spelle.