Home Breaking News Drivers urged to slow down and #Love30 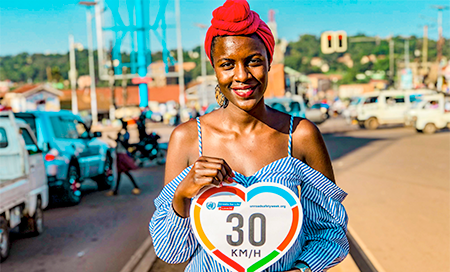 The theme for UN Global Road Safety Week 2021 is ‘Streets for Life #Love30’. The UN is calling for 30km/h speed limits to be the norm in cities worldwide in places where people mix with traffic. Low speed streets save lives and are the heart of any community.

Minister of State at the Department of Transport, Ms. Hildegarde Naughton said: “Low speed streets are the heart of any community, and contribute to making cities safe and healthy, green and liveable. 30 km/h zones in cities can also facilitate the attainment of a number of UN Sustainable Development Goals including those on health, education, infrastructure, sustainable cities, climate action and partnerships. Last year, we outlined in the Programme for Government a commitment to review and reduce speed limits, which will have both road safety and environmental benefits. The greater implementation of 30km/h speed limits in urban areas in Ireland will play a part in achieving these benefits. For example, in January Dublin City Council launched their ‘Love30’ campaign and in April invited members of the public to provide feedback on a proposal to have a default 30km/h speed limit across most areas of the city. We need to see more local authorities being more proactive in coming forward to consult with the public on the greater roll out of 30km/h limits in our villages, towns and cities.”

Mr Sam Waide, Chief Executive, Road Safety Authority said: “If someone is hit by a car travelling at 30km/h, nine in ten will survive, but if someone is hit by a car travelling 60km/h, only one in ten will survive. 30 km/h streets save lives and protect all who use them, especially the most vulnerable, like pedestrians, cyclists, children and older people and people with disabilities. 30km/h limits in our villages, towns and cities also mean a safer, healthier, greener, prosperous, quieter, and better quality of life for people. While Ireland is making progress implementing 30km/h speed limits, so much more needs to be done. For example, this week Spain introduced a new national 30km/h speed in all urban areas. In the Netherlands 70% of urban roads have a 30km/h or lower limit. In Scandinavian countries 30km/h is the norm in villages and towns. Over 25% of the UK’s population have a 20mph (30km/h) limit on the streets where they live, learn, shop or work. Brussels introduced a default speed limit of 30km/h in January and Paris plans to be 30km/h by default later this year or early next.”

Assistant Commissioner, Paula Hilman, Roads Policing and Community Engagement, An Garda Síochána said: “An Garda Síochána is supporting UN Global Road Safety Week and will be focusing on speeding drivers, particularly in our villages, towns and cities where vulnerable road users are at greatest risk. Drivers need to understand that breaking the speed limit, even just going that few kilometres over the posted speed limit, can be the difference between life, serious injury, or deaths for a cyclist or pedestrian. Excessive and inappropriate speed is the most dangerous behaviour on our roads, and it’s a contributing factor in a third of all fatal crashes. I would invite all road users to redouble their efforts to make our roads safer, not just for UN Global Road Safety week, but for every day of every week.”

The RSA is urging people to support UN Global Road Safety week by visiting www.unroadsafetyweek.org and joining the campaign to call for 30 km/h speed limits to be the norm for cities, towns and villages worldwide.

The RSA will be marking the 6th UN Global Road Safety Week with a new national and local radio advertising campaign. It highlights the danger of low-level speeding and the risk it poses to vulnerable road users. It is also being supported by digital and social media advertising.

As of 17 May 2021, a total of 45 people have been killed on Irish roads. This represents a decline of 9 deaths compared to the same date last year.

Krone at Solutrans 2021 Solutions for long-distance and urban deliveries