Home Breaking News “Education and Training is a right, not a privilege”

The School of Management Campus of Dublin’s Institute of Technology (DIT) in Anger Street hosted the official launch of an industry training programme which could be described as a milestone in the history of transport in Ireland. The new Level 6 Logistics Associate Apprenticeship  (LAA), which can eventually lead to a Level 9 (Masters) has been developed by the Freight Transport Association Ireland (FTAI), DIT and an industry lead consortium, and is the first non-craft apprenticeship in DIT.

The apprentices will spend one day per week in DIT, with the other four days based with their sponsor host transport company. In addition to ongoing projectwork throughout the 2 year programme, the apprentices must complete a variety of industry relevant modules developed by the consortium which are then  assessed to achieve certification. 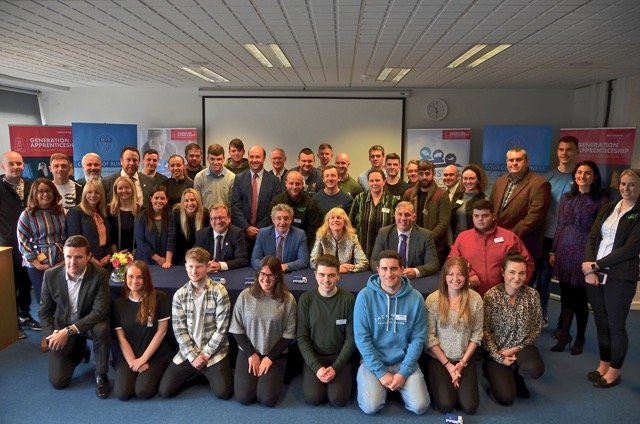 Government policy is to develop over 70 apprenticeships across a range of industries by 2020. The policy looks to address a skills and labour shortage that is already being felt by industry. This shortage was highlighted by the FTAI’s General Manager and Chair of the LAA Consortium Aidan Flynn, who cited the 2015 Forfas report which states that by 2025 the transport industry will need 30,000 new entrants.

The President of DIT Professor Brian Norton acknowledged the work invested in developing the apprenticeship, especially the efforts of Declan Allen, Assistant Head of School of Management at DIT, and Aidan Flynn. He expressed his viewpoint that: “we want an educated society, [where] education and training is a right, not a privilege.” He welcomed the 30 new apprentices to DIT and informed them they will be graduating from what will be the Dublin Technological University. In finishing the President noted: “what you don’t see is that the-semi-conductors and foods we produce cannot leave Ireland without logistics – it is a world class industry.”

Following on from Professor Norton, Minister of State for Training & Skills John Halligan TD said, “Employer buy-in is critical as the apprenticeship model is dependent on employers taking on apprentices.” He somewhat directed this at the SME sector who he would encourage to become more involved, and commented that “our SME’s are the most successful in Europe.”

A number of other speakers from the sponsor companies spoke positively about their experience of the process and about their expectations of the programme. The final speaker was Dr Mary-Liz Trant, Executive Director with SOLAS who summed up by advising the apprentices that this was a fantastic opportunity to up-skill, noting that “as we expand the apprenticeship you will be ambassadors for your industry.” Paul White