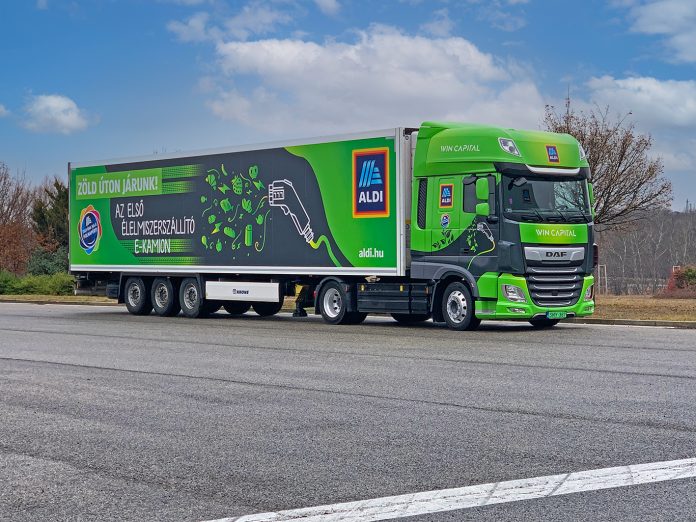 In the greater Budapest area, the WIN Capital Group has recently put five DAF XF electrically powered articulated trucks and Krone trailers into operation, which are intended for deliveries to Aldi branches. As part of this cooperation, five exclusively designed Cool Liners from Krone are combined with fully electric DAF tractor-units, converted by Electromega kft (Hungary). The drives were specially converted for this project to be able to deliver goods with low emissions within a radius of 230 km. The batteries can be fully recharged in just two hours. With this solution, Aldi saves 3,600 litres of diesel per unit per month and thus contributes to the achievement of its global sustainability goals.

Somogyi Gábor, Managing Director of Krone Trailer SE Kft. in Szigetszentmiklós: “We are grateful that we can contribute the trailers for the first electric articulated trucks in the region in cooperation with the WIN Capital Group and Aldi. Supplying food retailers in the greater area around the metropolis of Budapest places special demands on the equipment. That is why Happy Cargo (one of WIN Capital’s subsidiaries) and Aldi rely on the high reliability of the Krone Cool Liner.”

Even before this new project, the WIN Capital Group, as a partner of Aldi, cared for local deliveries to supermarkets. In food logistics, the Group relies exclusively on Cool Liners from Krone.

WIN Capital Kft. is a dynamically growing asset management company that focuses mainly on the logistics market. Since its establishment, the company has grown into one of the major logistics players in Hungary with having over 150 truck & trailer equipments, and the main pillars of its activities are supported by real estate development and real estate leasing.

WIN Capital provides a secure livelihood for more than 200 families. Its investments are mainly focused on the domestic logistics market and are aimed at small and medium-sized companies with a stable client base and high development potential.