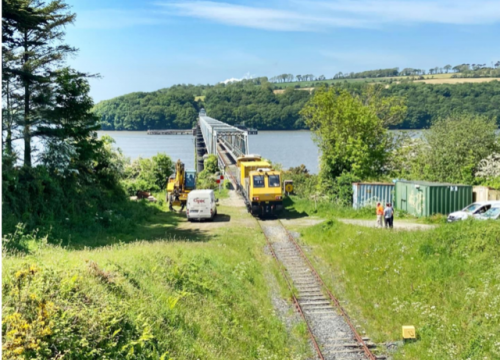 Transport Advocacy Group South East on Track welcomes the continuing maintenance of the Wexford to Waterford Rail line, as shown this week by Irish Rail’s Maintenance Train crossing the line twice. This shows that the rail infrastructure is still in place and passable by trains.

We would like to raise concerns that there are plans by Irish Rail to secure the river Barrow Bridge in the open position in the near future as confirmed by Minister Eamon Ryan recently https://www.oireachtas.ie/en/debates/question/2021-05-26/78/#pq_78 .

This would most likely render the bridge inoperable as the bridge is designed to be be mostly closed and occasionally opened for ships using New Ross Port. This Bridge is the longest rail bridge in the state and is rated as having National Significance in the National Inventory of Architectural Heritage.

No matter the future of this transport corridor, be it as an operational railway or a greenway, securing the bridge in the open position will most likely prevent any future crossings of the river Barrow using this bridge.