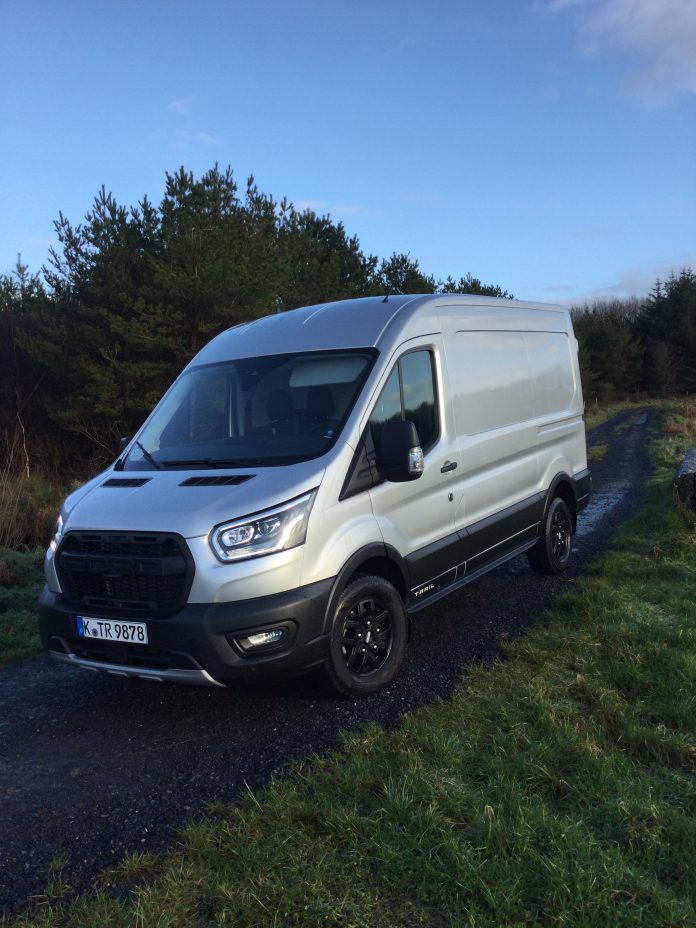 September last, Ford added to its commercial vehicles family with the introduction of the Trail and Active variants on both its (2-tonne) Transit and Transit Custom line-ups. In a sense, these new models cover two ends of the spectrum, one working around challenging terrain, while the other caters for ‘active’ lifestyles. The Transit Trail with its intelligent mLSD All-Wheel-Drive (AWD) system, improved traction is provided by a simple pressing of a switch. *It would make for a great campervan for the ultimate off-road adventure!

Within immediate view, the additional black cladding and the rather large ‘Ford’ lettering that dominate the matt black grille is noticeable, giving the vehicle a purposeful and bold appearance. Similar styling traits can be seen on the Ford Performance Raptor Pick-up. Blends in well with this Moondust Silver colour scheme on the bodywork. The spec and trim inside are further enhanced by the ‘Trail’ theme, with full leather seats, standard air-conditioning and heated windscreen.

Thanks to the mLSD AWD system, added traction on loose, slippery or soft ground surfaces is achieved, boasting practicality and confidence when off the beaten track. Developed in partnership with driveline technology specialists Quaife, the mLSD automatically transfers engine torque in low grip conditions to the wheel with the most traction, allowing Transit Trail to tackle the challenge ahead.

The vehicle’s Electronic Stability Control system has also been recalibrated to harmonise with the mLSD. The same technology has previously been used to enhance the traction and handling characteristics of Ford Performance RS & ST models and has no impact on CO2 emissions or fuel efficiency. In addition, to improving front-wheel drive Transit models’ capability, the mLSD’s compact size and lightweight design maintains optimised payloads and full interior load volume. Additional traction is delivered seamlessly and silently, with no additional inputs required from the driver. The AWD system works hand-in-hand with the vehicle’s electronic stability control and continually monitors traction to automatically distribute torque to the wheels with most grip, minimising wheelspin in low-grip situations.

Torque distribution between front and rear wheels is varied using a specially-developed electronically controlled AWD coupling. The coupling features a wet multi-plate clutch that is hydraulically operated using a high-performance electric pump, allowing instant responses and pre-emptive distribution of torque to the front wheels. The AWD system is fully electronically controlled, and constantly monitors inputs from the driver and vehicle – such as engine speed and torque, throttle position, steering angle, braking system and individual wheel speeds – to determine how the AWD system should respond to maintain optimum traction and stability. In addition to the front:rear torque split, Transit Trail can also bias torque across an axle to maintain progress if it detects that one wheel is slipping more than the other.

When faced with more challenging conditions, such as deep mud, sand or snow, the driver can select the Mud & Ruts mode in the dash, which shows up ‘Drive mode – Mud/Ruts’ on the dash when engaged. This can be done while on the move or ‘on the fly’.

While transgressing the ‘Old Bog Road’ with its loose gravel, ruts, water filled potholes and sharp turns, the Transit Trail carved through without any fuss. During the test run, the time to when the Ford Transit used a 4×4 system initially came to mind, converted by County, its one-time farm tractor counterparts, which featured a manually engaged system and a raised ride height. In more recent generations, a Haldex twin-clutch differential was used, all to good affect. The mLSD programme is more efficient, easier to operate and performs better. 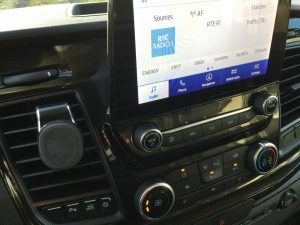 Fuel card fraud is on the rise throughout Europe

Volkswagen Commercial Vehicles sales down slightly in 2021 on previous year

On guard with refreshed Nissan N-Guard